Special
The Dark Garlic Drone is infused with mystical dark energy. It has cool magical weapons and cool magical look.
Dark Garlic Drone is an alternate ability of the Garlic Drone for the Cactus in Plants vs. Zombies: Garden Warfare 2 that was available from Rux in Rux's Bazaar (for 500,000 coins) and Crazy Dave's Frozen Upgrade. It shoots slow-firing, dark orbs that do not overheat. Its weapon is called the Dark Garlic and it deals up to 22 impact damage (10 impact damage plus the splash damage) and 12 splash damage. Its airstrike is called the Corn Strike.

The Dark Garlic Drone is infused with mystical dark energy. It has cool magical weapons and cool magical look.

This ability is great for crowd control due to the splash damage that can get you a lot of vanquishes at once. For this reason, this ability is best used in objective game modes like Suburbination, Turf Takeover and Gnome Bomb (when the zombies are trying to defuse the bombs). Its airstrike has a larger radius and drops faster, so you should be able to get lots of vanquishes with it. The drone also blends in very well with the night version of Turf Takeover maps and Frosty Creek as well, allowing you to attack zombies while camouflaged with the dark.

It is best to lead your targets and attack from a higher height than you would with other drones, as its projectile can damage your drone due to the Dark Garlic's splash damage. Remember to also be mobile and sneaky, as this drone shares the same 5 health as the regular Garlic Drone and can be taken out quickly if not careful.

This drone is highly effective against Imps and Scientists, as their low health and quick speed can be taken advantage of by the splash damage. Some scientist variants, such as the Zoologist and Chemist, are unable to effectively attack you due to their extremely limited range, so use this to your advantage as well.

The Dark Garlic Drone with the "Special" rarity, only seen if the player bought it in Crazy Dave's Frozen Upgrade 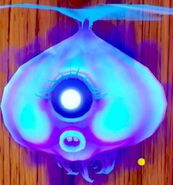