Super Rare
The Dark Flower is a nasty little plant. It shoots hurtful red lasers at the Zombies but doesn't heal, because it's an evil little flower.

Super Rare
The Dark Flower is a nasty little plant. It shoots hurtful red lasers at the Zombies but doesn't heal, because it's an evil little flower.
Dark Flower is an alternate ability for the Sunflower's Heal Flower. Instead of healing plants, it shoots harmful lasers at zombies. It looks like a Heal Flower but has dark red petals. These laser bursts are fired at the rate of a Pea Cannon, though it does not deal splash damage.

It fires a burst of six shots and deals four to five damage every hit, with a cooldown of 0.6 seconds between each burst. Like most of the other alternate abilities, it was first introduced in the Garden Variety DLC. Its attack is the Dark Energy and takes 45 seconds to recharge.

The Dark Flower is a nasty little plant. It shoots hurtful red lasers at the Zombies but doesn't heal, because it's an evil little flower.

Try to place these flowers while running around corners to surprise your enemies or stop zombies, possibly forcing them to attack it or possibly even dying in the process of chasing you. The Dark Flower is handy when stuck in a 1v2 situation as it can be a helpful damaging partner. Place it down and then launch the heal beam to heal it. When running or losing, try to disable the heal beam to throw in regeneration. The Dark Flower is not the best plant to be used in Gardens & Graveyards as it can be knocked out easily by Long Bombs, Imp Punts, ZPGs or Multi-Rocket despite its health, however, it can serve as a limited time, free-of-charge Spawnable Plant.

The Dark Flower can also be deployed when using the Sunbeam or the Solar Flare Beam to serve as a guard turret to protect or at least, warn the player of nearby zombies.

Keep in mind, unlike other AI Plants, this plant rarely misses due to its high accuracy, so don't worry about mobile characters like the Imp and Scientist as the Dark Flower can easily take them out.

A Zombie Stink Cloud or a Super Stink Cloud can damage the Dark Flower and blind it at the same time. Due to the Dark Flower's restricted range, you can back off and shoot the Sunflower in the process possibly vanquishing her. These flowers can be annoying if they see you while you cannot see them so be careful of your surroundings, especially near objectives. Unlike most potted plants, whenever the Dark Flower shoots, it never misses so be careful if you have low health as a single burst is capable of causing around 24 to 30 damage which can be potentially lethal if you are critically wounded. 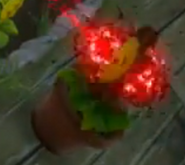 Back of the Dark Flower