Survive while evil potions boost zombies
Dark Ages - Night 9 is the ninth level of Dark Ages in Plants vs. Zombies 2. It is a Dark Alchemy level. This is the first Dark Alchemy level of Dark Ages, as well as the intended first of the game. There are evil potions to make the zombies tougher and faster. When this level is finished for the first time, the player gets a note.

Penny: User Dave, we have encountered a scroll.
Crazy Dave: I love side-scrollers! They're my second favorite kind of game.
Penny: This is not a game. It's a piece of parchment bearing a message.
Crazy Dave: Will ya look at that! It's Dark Ages email. Neat-o!

This is the first confrontation of potions to the player (if they have not seen them via Piñata Party). There is no tutorial demonstrated, so they player may find difficulty first time around. The player is highly recommended to bring Area of Effect plants such as Snapdragon and Fume-shroom, as they will easily deal with powered-up zombies. This will also combat the Jester Zombie. Necromancy can be a problem, as they can bring the aforementioned Jester Zombie inside defenses.

Potions cannot be destroyed (in this level), so if a potion appears close to the house, there is not much the player can do other than baiting a zombie to use the potion, then using an instant use plant like Cherry Bomb.

The trick to this level is to place as much as possible early on, so potions won't clog up the lawn and will defeat zombies quicker.

Start by planting two columns of Sun-shrooms in the back. Use Puff-shrooms and Snapdragons to take care of early zombies. When using Grave Busters, go for the ones disrupting your setup first. Then go for the ones with sun icons. Eventually your setup will be like this:

Use Cherry Bombs either when a zombie is about to eat your Sun-shroom, or when there are 3x3 clumps of Knights/Bucketheads.

Note: Especially in this level, you need to use at least one premium plant which is Shrinking Violet. 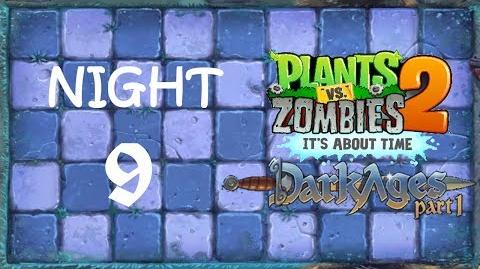 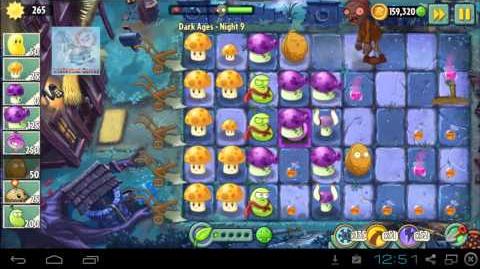 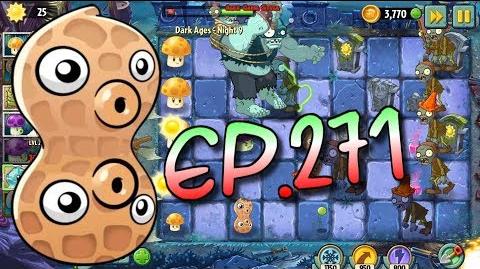 Retrieved from "https://plantsvszombies.fandom.com/wiki/Dark_Ages_-_Night_9?oldid=2262284"
Community content is available under CC-BY-SA unless otherwise noted.