Survive and protect the endangered plants
Dark Ages - Night 19 is the nineteenth level of Dark Ages in Plants vs. Zombies 2. It is a Save Our Seeds level. To complete this level, the player must protect three Magnet-shrooms. When this level is finished for the first time, the player unlocks the boss battle of Dark Ages.

The endangered plants' positions are similar to Day 15 of Ancient Egypt. However, this level is more difficult than the aforementioned level because the zombies are tougher. For example, there are Knight Zombies and Zombie Kings in it. Puff-shroom does not really work in this situation, as the zombies spawn close to it, and there are tombstones scattered near the Magnet-shrooms, and so Chili Bean is a more optimal choice. Jester Zombies are typically present, so area of effect plants like Snapdragon are the best offensive plant to use. Most defensive plants will come in handy in this level, primarily Tall-nut. Primal Wall-nut is a better choice, as he can barricade the Magnet-shrooms, so bring him if you have him. Wizard Zombies can benefit the player in it, as it can transform the Magnet-shrooms into sheep, which makes the Magnet-shrooms are invincible until the Wizard Zombie that transformed it is defeated. Zombie King is probably the most dangerous in this level, as it can supply Peasant Zombies with Knight Helms, which can easily overwhelm the three provided Magnet-shrooms. Planting more Magnet-shrooms can help with the Knight Zombies, but it is recommended to defeat the Zombie Kings, as well. You should also be aware of the necromancy ambushes.

This strategy allows the level to be completed without using Plant Food, paid content, premium plants, or losing any lawn mowers.

Snapdragons and Magnifying Grass are a powerful combination for many levels and will work as well here. Use Chili Beans to drag out and kill off the first few zombies while quickly planting Sun-shrooms in the first two columns and Magnifying Grass in the third. Use Grass and Chili Beans to continue controlling the zombies while Tall-nuts are placed in the column in front of the three endangered plants and Snapdragons are placed in the center lane tiles between and behind them. The Snapdragons will handle the core zombie load, while you can use Grass to shoot Zombie Kings and Wizards on sight. Destroy all tombstones in sight with Grave Buster and Grass. Wall-nuts are available in case an emergency stopgap is needed while waiting for Tall-nuts to recharge or if you are still low on sun (you may also bring Cherry Bomb instead). When the Gargantuar appears, simply shoot him to death with Grass.

7. When the Dark Ages Gargantuars come at the end of the level, use Plant Food on your Fume-shrooms. Do not try to always focus on them because they never appear on the rows with the endangered Magnet-shrooms. If you just want to pass the level without that much trouble, then let the lawn mowers kill them.

Plant two columns of Primal Sunflowers. If you have enough sun you can plant Blastberry Vine on Primal Sunflowers. Next plant column of your damage dealer and plant Blastberry Vines on Magnet-shrooms. (Or plant one Infi-nut and plant food him) Any other plants is for bonus protection and you dont need to use them. When Gargantuars appear, plant two Primal Potato Mines to kill them. Guacodile is helpful with wizard zombies.

Use the Gold Blooms to get sun. Put 4 Primal Peashooters on the bottom 4 lanes. With the remaining 75 sun, put the Infi-nut on the lane in front of the Magnet-Shrooms. Wait for the Gold Bloom to recharge. As soon as you get your first plant food, use it on the Infi-nut. When the first wave comes, use Blover, then Reinforce-mint to blow them all away. (Similar to the Spring Bean + Blover strategy when it wasn't patched) If any Imps go behind your plants you can grapeshot them if you want to. In the lane where the magnet shrooms are but in the tiles where there aren't Magnet Shrooms, put Snapdragons/Cold Snapdragons. Where the grave is blocking the lane of Primal Peashooters, put it behind the grave to destroy the grave. When the second wave comes, reload the Reinforce-mint and use the Blover + Reinforce-mint.

Put Chard Guards in front of the Infi-nut, and use Blover when needed.

For Cherry Bomb: Try to reload it using plant food if you can. 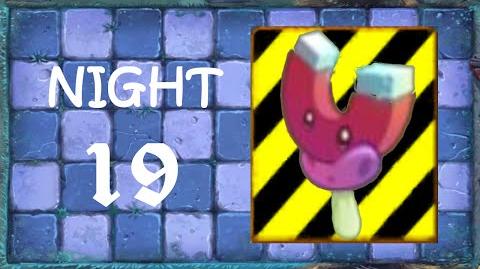 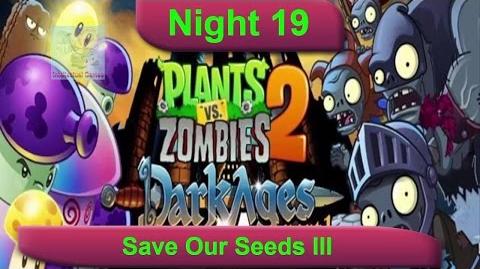 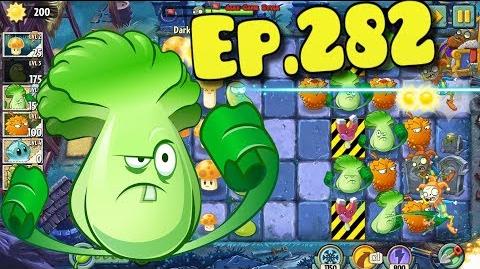 Retrieved from "https://plantsvszombies.fandom.com/wiki/Dark_Ages_-_Night_19?oldid=2277693"
Community content is available under CC-BY-SA unless otherwise noted.