Survive while evil potions boost zombies
Dark Ages - Night 17 is the seventeenth level of Dark Ages in Plants vs. Zombies 2. It is a Dark Alchemy level. After completing this level, the player receives a money bag.

The lawn is filled with potions at the beginning of the level, as well as many tombstones hindering progress to the front of the lawn. Luckily, these Tombstones provide sun and Plant Food, so Grave Buster should be used immediately. All Dark Ages zombies are present in this level as well. Jester Zombies are present, however, only by Necromancy ambushes. Wizard Zombies are also abundant in this level as well. Zombie King should be countered with Magnet-shroom. Very powerful zombies come around, so a good defense must be set up as soon as possible.

NOTE: Some graves may not spawn due to the other graves/potions currently occupying their positions.

This one is a harder variation of the ninth night of Dark Ages. But this will be easy if you will follow all the procedures carefully. First, plant a column of Sun-shrooms on the second column. Next is to remove the gravestone that contains a Plant Food. Now Plant the Potato Mine on where will the first Peasant Zombie arrive. Adjacent to the potions, plant an Iceberg Lettuce and a Sun Bean adjacent to the Iceberg Lettuce. Once frozen shut again, put another Sun Bean adjacent to the zombie then blow it up with Potato Mine. Now do the same thing to the second and third zombies. Once the Buckethead Peasant arrives, do the same procedure.

Once you have harvested enough sun, place the Fume-shrooms on the third column. If you have not used the Plant Food you have obtained yet, the use it on any of the Sun-shrooms you have planted. No need to double the column of Sun-shrooms since you have the Sun Bean.

Now plant your first Winter Melon on any column you want. While your Fume-shrooms bust the zombies, you can feed one of your Sun-shrooms with a Plant Food or just the Sun Bean itself but before doing so, look first for a Buckethead Peasant so it will help you greatly on your sun production.

After that, Jester Zombie and Imp Monk Zombie will arrive at random tombstones, to be specific, fourth columns. If it happens the Jester Zombie appears on a row with Winter Melon, freeze it with Iceberg Lettuce while spinning so it will not become a great threat. This will serve as your alternative "defensive" tactic. Once disposed, another Buckethead Peasant will appear. Feed it again with a Plant Food fed Sun Bean. This will help you plant more Winter Melons at this state. It will be then followed by arousing of one column of gravestones at the fifth column then an ambush consisting of two Jester Zombies. Freeze either one of them to provide open fire for the Winter Melon while the other one will just have to be sterilized by delaying it with Sun-shrooms.

Now prepare for the second wave of the level, it will be preceded by a surprise attack composed of two Jester Zombies and one Wizard Zombie. This will be hard enough for you to handle (assuming you do not have an extra Plant Food left.) now once disposed, plant another column of Winter Melons, this time adjacent to the Fume-shrooms. The Zombie King will also arrive at this stage, be ready for extra precautions. Keep in mind that at this stage the gravestones will always spawn at the fifth column.

At this rate, you are getting to the penultimate scenario before triggering the final wave. A good way here is to freeze the two Wizard Zombies and three Jester Zombies by putting an Iceberg Lettuce in the sixth row then feed it with Plant Food to provide open fire for Jester Zombies once again. Because if you do not there is only a slight chance of succession you will get in repelling them and you will be vulnerable because you do not have Tall-nuts.

Finally, at the final wave, kill all the zombies and claim your reward.

Begin the level by planting a column of Sun-shrooms on the third row. Use Iceberg Lettuce to stall the first few peasants and continue to build up sun. Then, plant a boosted Spring Bean and Blover in the first column to blow away all zombies on screen. You will need to time this right, but once you get the hang of it, this strategy is easy. Continue this cycle of bouncing and blowing, using Wall-nuts to stall Knight Zombies, Iceberg Lettuce to freeze Jester Zombies, and Cherry Bomb to take care of groups of Wizard Zombies. If you can, charge a group of Potato Mines behind the Wall-nuts, just in case the Wizard Zombies turn them into sheep. If Spring Bean is recharging and you brought the Grave Buster, use it on the center tombstone to obtain a Plant Food, then use it on one of your Spring Beans followed by a Blover to blow away all zombies and allow your Spring Bean to recharge. If the first two columns get full with Spring Beans, simply dig them up to make room for new boosted ones.

This strategy can complete the level without using Plant Food, paid content, premium plants, or losing any lawn mowers.

Twin Sunflowers are effective even in this night level as Grave Busters and sun-producing Tombstones will give you all the sun you need to build them quickly. Be patient and kill the first few zombies with Chili Beans while building two full sets of Twin Sunflowers in the second and third columns, using sun farmed from the tombstones. If you need to, you can also use a Cherry Bomb to clear out crowds of tombstones, often at a sun profit. Plant five Magnifying Grasses in the first column. Keep farming sun from the tombstones and Twin Sunflowers, using Chili Beans and Potato Mines to kill the zombies at a slower pace. By the time Zombie Kings appear, you will have collected thousands of sun, more than enough to shoot down every last enemy in the level with Magnifying Grass (though you may still easily conserve sun just by spamming the front lines with Chili Beans and Mines). Wall-nuts may be used in case of emergencies. If any Wizards, Kings, or the Gargantuar appears, gun them down on sight with Grass.

Use the stalling plants to stall the zombies. After getting enough sun, blow up some tombstones. Place Chompers on boosted zombies' lanes along with a Primal Wall-nut. Due to the boost, Chomper will easily kill the zombies. Remove the Chompers and replace them with new ones (only if you have the Shovel Boost). Try to use Cherry Bomb mostly on the Wizards though Chomper may be used as well. 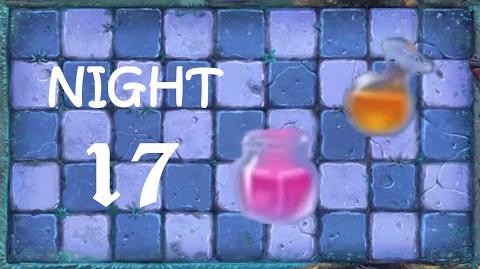 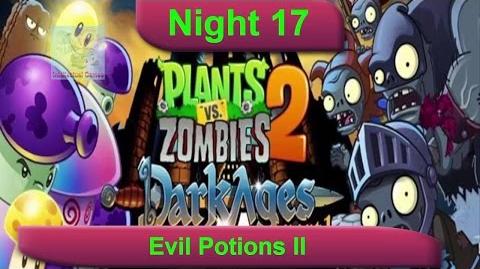 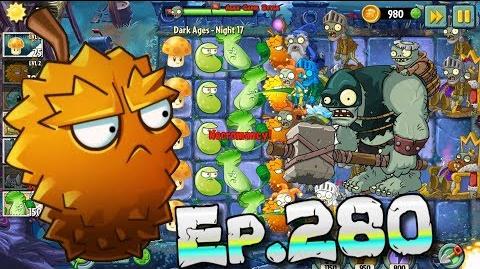 Retrieved from "https://plantsvszombies.fandom.com/wiki/Dark_Ages_-_Night_17?oldid=2262543"
Community content is available under CC-BY-SA unless otherwise noted.