Seven (at the start)

Plan your defense and defeat the zombies
Dark Ages - Night 15 is the fifteenth level of Dark Ages in Plants vs. Zombies 2. It is a Last Stand level. The player starts the level with 2200 sun and three Plant Food. When this level is finished for the first time, the player unlocks Magnet-shroom.

This level is very difficult, as it consist of every zombie encountered previously in Dark Ages. The Jester Zombie will limit the plants usable. The Knight Zombie is highly dangerous, as many were spawned, and with only 2200 sun given to spend, it may be difficult to defeat. Wizard Zombie is possibly the worst zombie to combat in this level, as the necromancy ambushes and the tombstones nearly force the player to use a left-most strategy, as well as short ranged plants. The problem is, the Wizard Zombie moves slowly, and has lots of time to transform plants into sheep. Overall, the player may need to use some digging to beat this level, as the first time the player does not have Magnet-shroom.

This strategy can complete the level without Plant Food, paid content, store-bought plants, or losing lawn mowers. If you have not unlocked the Magnet-shroom yet and just want to acquire it easily, you can use the same strategy along with Melon-pult's Plant Food attack.

To win easily, simply fill the first column with Laser Beans, the second column with FOUR Snapdragons, leaving the fourth lane tile open (the Melon-pult will eventually go here), and protect all lanes with a Wall-nut. Plant the Melon-pult in the free space with the Snapdragons after the Laser Beans have killed the first set of Jesters. When the Necromancy ambush occurs, immediately use Plant Food on the Melon-pult to kill most of the Knights and damage the Wizards enough for the Laser Beans to quickly finish them. Do the same for whenever Wizards appear in the level. You can spend all your remaining Plant Food during the final wave to crush all of the Wizards coming in and then finish off the dying Knights normally. Laser Beans will destroy Plant Food-carrying Tombstones from across the map and keep you well stocked. Jesters may throw back a melon or two but not enough to make a difference. Infi-nut is there in case of emergency protection for any reason and Wall-nut is not recharged.

With Magnet-shroom, you can use the same setup, without needing Plant Food. Arrange the four Snapdragons so that they line up as a pair in front of the second and fourth lane Laser Beans. Place three Magnet-shrooms in every free tile in the second column. This group will keep the Knights and Bucketheads from progressing too far, even if all of your Wall-nuts have been turned to sheep. After the Necromancy ambush, dig up the Laser Beans behind the Snapdragons and use their sun to Cherry Bomb the Wizards that appear in the final wave, then clean up the rest of the zombies. It is STILL possible to win this way WITHOUT unlocking Magnet-shroom first, although it requires a somewhat different plant arrangement, skillful use of Magnifying Grass and expert knowledge of the level's zombie layout.

These plants do not shoot projectiles, therefore the Jester Zombies cannot deflect them.

When the Knight Zombies came give the most forward use Plant Food on the Infi-nuts. Make sure you leave at least one Plant Food before the tombstones appear.

By the last wave, most of the plants should have been turned into sheep by the Wizard Zombies. Let the lawn mowers deal with the zombies.

Place Lightning Reeds at the first and second column, Spikeweed at nineth column.

Use boost on Lightning Reed when Wizard Zombies approaches.

When the final wave arrived, use Cherry Bomb to destroy them or there are too many plants turned into sheep,you have 3 Cherry Bombs in this level.

No lawn mowers needed to deal with them. 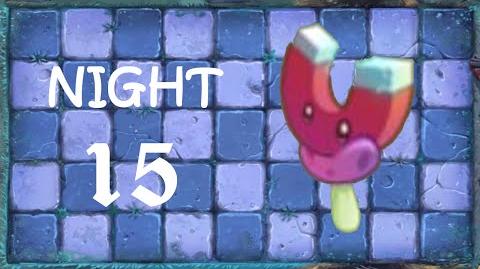 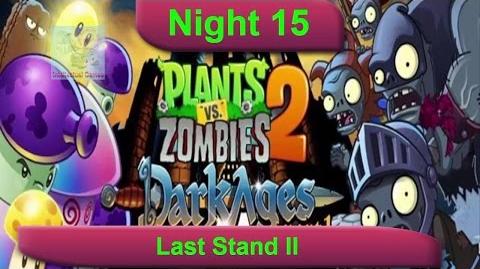 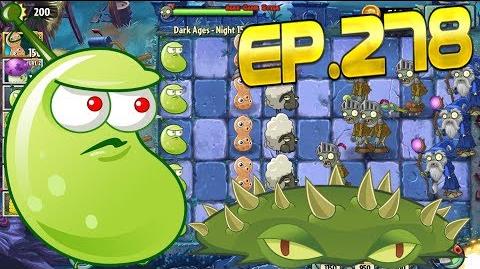 Retrieved from "https://plantsvszombies.fandom.com/wiki/Dark_Ages_-_Night_15?oldid=2262518"
Community content is available under CC-BY-SA unless otherwise noted.