Survive and keep the Puff-shroom alive
Dark Ages - Night 12 is the twelfth level of Dark Ages in Plants vs. Zombies 2. It is a Save Our Seeds level. To complete it, the player must protect five Puff-shrooms and prevent them from disappearing. When this level is finished for the first time, the player unlocks the Dark Ages Endless Zone - Arthur's Challenge.

(After the player completes the level and unlocks Arthur's Challenge, Crazy Dave and Penny appear)
Crazy Dave: Why would anyone go and stick a nice sword in a dirty ol' rock?
Penny: I understand it to be a test, User Dave.
Penny: Only someone with great physical strength and strength of character may remove it.
Crazy Dave: I bet someone with a jackhammer could remove it.
Crazy Dave: A CRAAAZY someone!
Penny: An inelegant but no doubt effective solution to the test, User Dave.
(Crazy Dave and Penny leave)

Puff-shrooms are the endangered plants. Because of their gimmick of disappearing after a while, using Plant Food on them is needed to win. Luckily, there is an ample supply of Plant Food throughout the level. Boosting a Puff-shroom also boosts all the others. Saving Plant Food should be kept in order, as mindlessly using it all can easily result in a loss. Jester Zombie and Wizard Zombie can prove to be an annoying pair, as most area-of-effect plants are short ranged. Necromancy! can also cause some trouble. For last resort options, spending coins on Plant Food, using upgrades like Mower Launch (lawn mowers are unreachable in this Save Our Seeds level), or spending coins for Power-Ups can ease the danger situation that the player faces.

When Puff-shroom disappears (not eaten nor killed by the zombies) 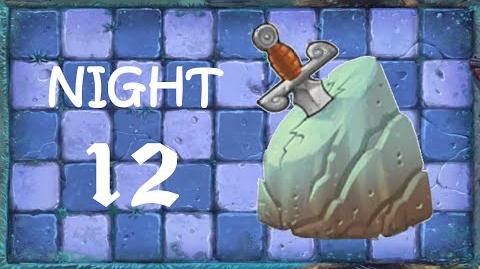 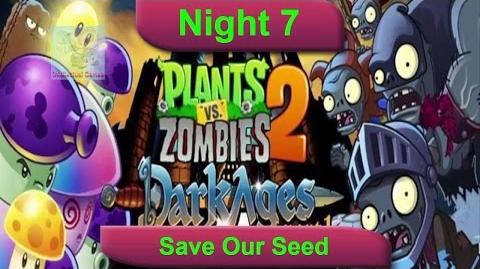 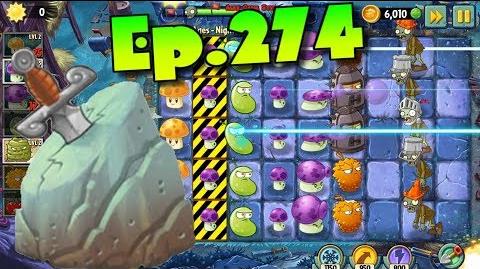 Retrieved from "https://plantsvszombies.fandom.com/wiki/Dark_Ages_-_Night_12?oldid=2297709"
Community content is available under CC-BY-SA unless otherwise noted.