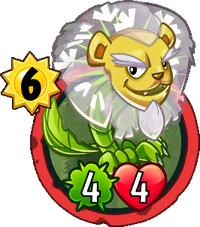 When played: Damage the Zombie Hero for half their health.
He's developed a taste for Zombie Heroes.
Dandy Lion King is a premium legendary plant card in Plants vs. Zombies Heroes and a member of the

. He does not have any traits, and his ability does damage to the zombie hero for half their current health when he is played, rounded down to the nearest integer.

He is based on the dandelion, specifically the common dandelion (Taraxacum officinale), a genus of flowering plants; and a lion (Panthera leo).

His name is a portmanteau of "dandelion," "dandy," "lion," and The Lion King, an animated film by Disney, which was released in 1994.

His description is a reference to his ability and possibly man-eating lions too.

Dandy Lion King's ability to halve your opponent's health upon being played can be pretty big if Dandy Lion King is played at the right time. However, Dandy Lion King is quite an expensive play, so you will have to drag until the late game to utilize him. Since the Kabloom class does not appreciate long games, it is recommended to finish your opponent as quickly as you can to avoid burning out. Make sure you have a combo or rush ready when you plan to use Dandy Lion King.

Solar Flare can use him in a healing deck with Heartichoke and Venus Flytraplanet as a finishing combo: playing Dandy Lion King in Venus Flytraplanet will heal her for the damage he does, which allows Heartichoke to knock off the remaining half of her opponent's health right after that. Even if her opponent's health is at an odd number, 1 health will not be enough for them to make a comeback most of the time. This combo can also be executed right on turn 6 (Heartichoke and Venus Flytraplanet can be played on turns 4 and 5), as long as everything is set up well. She also has access to ramp cards like Sunflower, Solar Winds, and Sunburn to make extra sun for more cards in case something goes wrong. Or, if she decides to use Dandy Lion King in a flower deck, she can play him in front of a tough zombie while Briar Rose on the field to immediately destroy it, making him a threat even after his ability has activated.

As Nightcap, you can play Rescue Radish to Bounce Dandy Lion King so that he can be replayed later on and give your opponent another big hit. But if your opponent is at a low amount of health, playing cheaper damaging cards or rushing your opponent to secure their defeat is a much more viable strategy instead.

While his stats are not that great for a 6-sun plant, Dandy Lion King makes up for it by taking away a large chunk of health from you. Whenever this plant is in play, avoid Bouncing him whatsoever unless it leads to victory, as your opponent can replay him and inflict even more damage.

If you want to avoid taking damage from his ability, Planetary Gladiator can absorb the hit for you. Or, while luck-based and hard to purposely control, you can block the attack if your Super-Block Meter is close from activating.

It is also best to remove as many ramp cards such as Sunflowers and Solar Winds from the field to delay him from being played.

Retrieved from "https://plantsvszombies.fandom.com/wiki/Dandy_Lion_King?oldid=2368505"
Community content is available under CC-BY-SA unless otherwise noted.