For other versions, see Dandelion (disambiguation)

Dandelion (蒲公英; pinyin: púgōngyīng) was a plant in Plants vs. Zombies Online. It was unlocked after completing Qin Shi Huang Mausoleum - Level 3-1. It created 3x3 explosions when a zombie was close to it.

It was based on the Taraxacum officinale, the common field dandelion.

When given Plant Food, Dandelion created a big explosion that dealt heavy damage in a 5x5 area.

Attacked the whole column its target was in.

Dandelion on the map

Dandelion on the new map

Dandelion about to explode 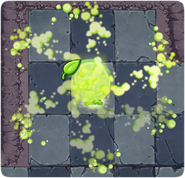 Its last costume
Add a photo to this gallery

Retrieved from "https://plantsvszombies.fandom.com/wiki/Dandelion_(PvZO)?oldid=2352250"
Community content is available under CC-BY-SA unless otherwise noted.