For the similarly named zombie in Plants vs. Zombies 2, see MC Zom-B.

5 minutes
“Gruhhhh braaaains,” moans DJ Zom-B. It’s a succinct and telling expression of his overall worldview.
DJ Zom-B was a zombie encountered in Plants vs. Zombies Adventures. The main difference from the regular Zombie is that he had five hats and a gold necklace, which acted like armor to protect him from any incoming damage. Because of this, he had an incredibly high toughness compared to other zombies. However, once these shields were gone, he will act as a normal Zombie.

When first discovered, it is quite hard to deal with him, having a total of 32 health. Planting some Beets next to a Wall-nut should do. If you are not using Beets, let him get in the range of most of your plants and then freeze him with ZombiFreeze. This should take most of his hats off, leaving little left. In farther levels, Flaming Peas should easily take off all the hats without any ZombiFreeze needed. Once Bamboo Shoots is unlocked, DJ Zom-Bs becomes even much less of a threat, as one shot from a Bamboo Shoot can take out three of his hats at once. Finally, use Magnet Plant to steal his necklace.

In Brainball, a wave of DJ Zom-Bs along with some other zombies are very deadly. They can horde around a Wall-nut and eat it quite fast. If there are some Beets nearby, you should try to freeze these plants as they deal quite a lot of damage. If you wish to send in some Conga Leaders, it is best to let the DJ Zom-B take hits for the Conga Leader to protect them, thus leading more spawned Conga Dancers. 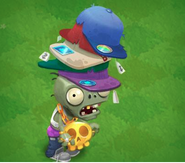 Retrieved from "https://plantsvszombies.fandom.com/wiki/DJ_Zom-B?oldid=2341948"
Community content is available under CC-BY-SA unless otherwise noted.