When destroyed: Gain a Vengeful Cyborg.
He'll be back.
Cyborg Zombie is a galactic super-rare zombie card in Plants vs. Zombies Heroes and a member of the

. He has the Hunt trait, and his ability adds a Vengeful Cyborg into the zombie hero's hand when he is destroyed.

Cyborg Zombie is based off the fictional cyborg Steve Austin from the 1970s television series The Six Million Dollar Man. The series follows Steve Austin as a secret agent by the U.S. government after being enhanced by cybernetic implants following a fatal accident.

Compared to Dog Walker, this costs 1 more brain, but it having 1

more than Dog Walker allows him to destroy more dangerous plants, such as Sweet Pea, Black-Eyed Pea, and Sportacus.

However, his ability is what makes him shine as you can earn a stronger version of this zombie when he is destroyed. This is useful if you are playing this early game so you can play expensive cards in the late game. Since he has low health and the Hunt trait, it is very easy for the plant hero to destroy it. Once you gain Vengeful Cyborg from this zombie, you can play him on turn 5 or above to distract the plant hero from playing powerful plants which will most likely take 5 damage. With Vengeful Cyborg, you can give him the

Frenzy trait or a boost from Vitamin Z or Area 22 to prevent the plant hero from playing strong plants.

Since he is a science zombie, this zombie works well with Immorticia since he can synergize with Zombot Drone Engineer, Gadget Scientist, and Interdimensional Zombie. This can work effectively if Cyborg Zombie is destroyed as you can play Vengeful Cyborg and take a huge advantage of science synergy.

You can treat this zombie like a powerful version of Dog Walker, but except when he is destroyed, he can return to the zombie hero's hand and become stronger. Since he has low health, you can play any plant that can do at least 2 damage or use a trick like Banana Bomb or Berry Blast to destroy him. But be prepared in the late game once the zombie hero plays Vengeful Cyborg, as he is stronger than his original version.

Also, be careful of the order of cards that you play when Cyborg Zombie is on the field, as you may want weaker cards to deal with this zombie while other cards attack your opponent directly.

Cyborg Zombie on the background of the Galactic Gardens battlefield

Cyborg Zombie with the 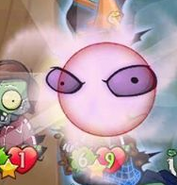 Possessed being played on Cyborg Zombie 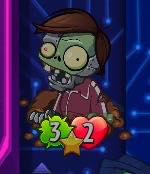 Cyborg Zombie tinted gray due to a glitch 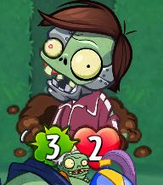 Gigantic Cyborg Zombie due to a glitch 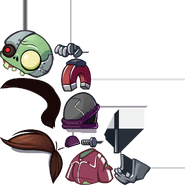 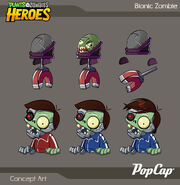