End of turn: All Gargantuars hide in Gravestones.
The lost temples of Hollow Earth were mysterious and inviting. Until they started to move.
Cursed Gargolith is a colossal super-rare zombie card in Plants vs. Zombies Heroes and a member of the

It has the Gravestone trait, and its ability hides each Gargantuar on the field, including it, in a gravestone at the end of every turn. This ability persists until all Cursed Gargoliths are removed from the field.

It is based on a Gargantuar, and a golem, an animated anthropomorphic being that is magically created entirely from inanimate matter, which is traditionally clay or mud. However, Cursed Gargolith being a Gargantuar made of stone may be a reference to the fictional golems seen nowadays, which are typically gigantic and made of stone.

Its name is a combination of "cursed," and "Gargolith," which is a portmanteau of "Gargantuar," the type of zombie it is, and "monolith," referring to its appearance.

Its description may be a reference to how ancient temples in fiction are often guarded by golems.

The lost temples of Hollow Earth were mysterious and inviting. Until they started to move.

Cursed Gargolith is extremely powerful when used in a deck containing many Gargantuars, as it will hide each of them in a gravestone at the end of each turn. This will restore them to full health as well as protecting them from most plant tricks. However, this will also shut down all stat-boosting options that aren't environments.

If you are planning on playing this card, spread out your Gargantuars to make them less susceptible to Blockbuster. Also, be warned that this card's ability is slightly different than Mixed-Up Gravedigger as it does not mix up their placements, which ensures your opponent knows where each Gargantuars are hiding.

The best part of this zombie is the fact it and any hidden Gargantuars can only be destroyed with anti-gravestone cards, meaning cards like Squash, Lawnmower, and Doom-Shroom are useless, making it useful against heroes who have no way of dealing with gravestones at all, namely Solar Flare, Chompzilla, and Captain Combustible.

Each Sneaky hero can use this card effectively:

Cursed Gargolith is a very dangerous zombie, primarily because of the Gargantuars, including itself, have their stats reset every turn. If you can't destroy the Gargantuars during the Fight! phase or while they are in their gravestones, or if your opponent uses the Zombot 1000 + Cursed Gargolith combo, it will be a definite game over for you unless you get lucky with Grapes of Wrath's "When Destroyed" ability. While you can't possibly deal with those situations, you can stop Cursed Gargolith before it locks you down, assuming you have the right cards.

Because this card has a similar ability to Mixed-Up Gravedigger, strategies usable against him are also useful against Cursed Gargolith, namely anti-gravestone cards such as Grave Buster, Cool Bean, and Blockbuster. Grave Mistake can also be used since its brain cost is quite really high, but keep in mind that it can be played again the next turn. However, one key difference between Mixed-Up Gravedigger and Cursed Gargolith is that the gravestones' positions are not shuffled, so make sure to memorize which Gargantuar is contained in which gravestone to determine which one to play your anti-gravestone cards on.

Another difference is that Cursed Gargolith itself will be in a gravestone, so playing a Grave Buster on it before its ability can activate can save you a lot of trouble. Another tactic is to deliberately allow its ability to activate to make your opponents' Gargantuars vulnerable to anti-gravestone cards. Its high cost makes it easy to predict: if your opponent plays a single gravestone with many Gargantuars on the field and ends their Zombies Play phase, it is likely that they have played a Cursed Gargolith, though Neptuna might be using Zombot Battlecruiser 5000 instead.

Should you have no anti-gravestone cards, focus on destroying Cursed Gargolith with plant fighters. Playing a weak flower in its lane with a Briar Rose on the field will immediately destroy it should it attack the flower. However, your opponent may remove Briar Rose or the weak flower. If not, the only option is to use plants with 6 strength or more, as chipping away won’t work.

Also, Tater Toss is enough to beat this zombie by the cheapest way, as the hothead does 6 damage. As Spudow is a guardian hero, however, he should have enough Anti-Gravestone cards to use against them. 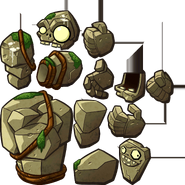 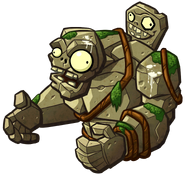 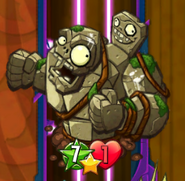 An unplayable Cursed Gargolith card without its strength and health (glitch)

Two Cursed Gargoliths on the field, the first hurt and the second attacking