Deals damage to zombies by striking them with curling stones and generates an ice trail to slow them down.

The Curling Corms are still the most popular curling champions in this year's Winter Games. Their unique strategy is to knock away the other player's stones at the last minute, leaving only their own, changing the field, and leaving others nowhere to go.

Curling Corms (荸荠兄弟; pinyin: bíqí xiōngdì) are a legendary Monthly special plant introduced in the v2.5.0 update of the Chinese version of Plants vs. Zombies 2 alongside Pokra and Penny's Pursuit. They knock back zombies they hit and leave a chilling trail behind.

Curling Corms attack zombies by launching themselves at zombies. The first chestnut will be sent down the lane with a chance of generating an ice trail. When it hits a zombie, it knocks them back and the chestnut remains on that tile as a defensive plant.

Curling Corms are based on the Eleocharis dulcis, known commonly as the water chestnut, an edible corm produced by the grass-like sedge of the family Cyperaceae.

Their name and abilities are also based on the ice sport Curling, wherein two teams slide polished granite stones on an expansive ice sheet with points being determined by how close the stones land to the center of a large target printed on the ice.

When fed Plant Food, Curling Corns releases a giant water chestnut, instantly killing all small- and medium-sized zombies and leaving an ice trail in its way. 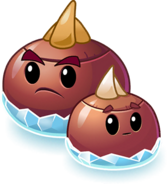 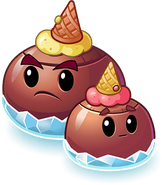 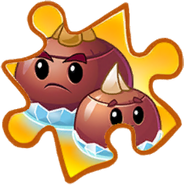 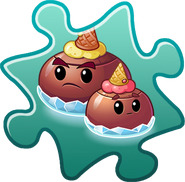 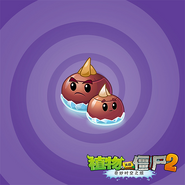 Seed Packet texture
Add a photo to this gallery

Retrieved from "https://plantsvszombies.fandom.com/wiki/Curling_Corms?oldid=2372709"
Community content is available under CC-BY-SA unless otherwise noted.