For the similar looking zombie from the original Plants vs. Zombies, see Jack-in-the-Box Zombie.

None
He always knows what time it is. CRAZY TIME!
Cuckoo Zombie is a basic common zombie card in Plants vs. Zombies Heroes and a member of the

. He does not have any traits or abilities. His closest plant counterpart is Zapricot.

He is based on the Jack-in-the-Box Zombie in Plants vs. Zombies. However, he holds a cuckoo clock instead of a jack-in-the-box in this game, which does not detonate unlike the former.

The word "cuckoo" in his name has two meanings. The first meaning is a reference to the cuckoo clock he holds, and the second refers to how he acts and looks crazy.

His description and tribe make a reference to the clock he holds.

He always knows what time it is. CRAZY TIME!

Cuckoo Zombie could be used as an early-game glass cannon since he has enough strength to do a big chunk of damage to your opponent or destroy almost every plant playable by then, but you might be better off saving him for a bit later since the more dangerous plants can be played a turn or two later.

If you wish for Cuckoo Zombie to hit your opponent, he can be played on an empty lane, but your opponent can easily block it with one of their weak plants to essentially waste him. To prevent that, you should prepare a removal card to destroy that plant. On the other hand, using him to destroy a threatening plant only requires you to play Cuckoo Zombie right in front of that plant. While plant tricks are able to remove him either way, there is nothing you can do about that.

Cuckoo Zombie goes well with Valkyrie and in rush decks in general since he is easily destroyed.

Electric Boogaloo and Z-Mech can use boosting cards to keep Cuckoo Zombie alive for longer and make him even bigger of a threat, though

Hearty's boosts are better since he lacks health. On top of that, they can also grant him Frenzy so that Cuckoo Zombie can still hit their opponent after destroying whatever is blocking him, shoud he survive. Electric Boogaloo can also pair him up with Cat Lady and Zookeeper since Cuckoo Zombie is a pet, and he fits with the general rush style of pet decks too. Professor Brainstorm can make him do a bonus attack via Electrician, Mustache Monument, or Lurch for Lunch; while he can't grant Cuckoo Zombie survivability or extra strength, it is a more immediate response in case of an opportunity.

However, if you want to do 4 damage for just a turn, Tennis Champ is usually better as she costs 1 brain less to play.

He may have high strength, but his 1 health makes him easy to pick off. You can take out a single Cuckoo Zombie with any early-game card, and groups of them with Sour Grapes or Scorched Earth. 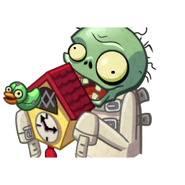 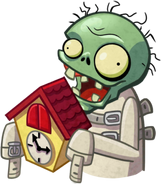 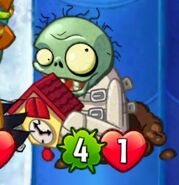 Gigantic Cuckoo Zombie due to a glitch

Cuckoo Zombie with the 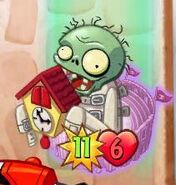 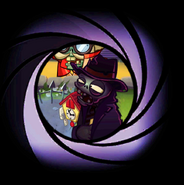 Cuckoo Zombie on a Basic Pack

The player having the choice between Cuckoo Zombie and Exploding Imp as the prize for completing a level before update 1.2.11