N/A
Crystal Guardians are a mechanic in Plants vs. Zombies: Garden Warfare 2. They function as the plants' equivalent of the Zombot Turret. They were first seen in the IGN Commentary.

Rose can build or summon them by holding and pressing the interact button (just like the Engineer) in certain predetermined spots.

The Crystal Guardians can only be built in Herbal Assault to defend the portal (in a similar manner to how the Zombot Turrets are built to protect the Teleporter). Its attack is named Magic Crystals, and each shot deals 5 damage. 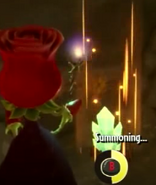 A Crystal Guardian seen from the front

Another view of a Crystal Guardian