when a Plant or Zombie is frozen.
When played:

Freeze a Plant.
Freezing Plants in the far reaches of Space is not what he'd imagined he'd spend his life doing. But as the old Yeti saying goes, "When life hands you snow, you make snow cones."
Cryo-Yeti is a galactic legendary zombie card in Plants vs. Zombies Heroes and a member of the

He has the Gravestone trait, and his ability gives him +2

every time a plant or zombie receives the

Freeze effect and gives a selected plant the

Freeze effect when he is played.

His closest plant counterparts are Snowdrop and Chilly Pepper.

His description makes a reference to the proverbial phrase, "When life gives you lemons, make lemonade," which is used to encourage optimism in the face of misfortune.

Freezing Plants in the far reaches of Space is not what he'd imagined he'd spend his life doing. But as the old Yeti saying goes, "When life hands you snow, you make snow cones."

Cryo Yeti's main purpose is to stall the game slightly longer while also giving you a high stat unit, starting out at 5

zombie that can be boosted further.

Thanks to his Gravestone trait, you can

Freeze a plant after your opponent plays their cards, he's immune to most removal cards, and you can also give him a small initial boost with Headstone Carver for an even stronger start. He can also counter plant

Freeze decks to some degree, although there are several ways such decks can get past him easily.

Freeze ability is crucial as he needs a +2

boost from the start to get himself going, so you should never play him if you are confident that your opponent won't play Plants. On the other hand, contrary to popular belief, you do not have to play him with other Freeze cards, as his stats are already on curve with a good ability.

You can also reuse his ability with Mixed-Up Gravedigger to stall the game even longer. Playing more Cryo Yetis is also a valid option, as all Cryo Yetis on the board already will gain +2

This zombie is the best as Brain Freeze, mainly due to his signature superpower, Frozen Tundra, as it can

Freeze all plants on all ground lanes, which can give this zombie a massive boost if there are more plants on ground lanes. He also has access to Area 22, which you can set up before and put Cryo Yeti in, who will then almost always hit the plant hero with a strength boost due to its newly acquired Frenzy trait.

He can also be used well as Huge-Gigantacus, as his superpower, Ice Moon, can give him a maximum of +4

Freezing all plants on his lane and giving him the

Impfinity can also use his endless supply of removal in the form of Bungee Plumbers, Exploding Fruitcakes, and Final Missions to ensure that Cryo Yeti will hurt the plant hero.

Not only does this zombie

Freeze a plant upon being played, he gets stronger and stronger for each plant frozen; since your opponent will most likely run a

Freeze deck, Cryo-Yeti will accumulate lots of strength and health if poorly dealt with. You should be extra careful if you are running a

Freeze deck yourself as Cryo-Yeti will get boosted for zombies frozen as well, should you be playing as a Smarty hero.

The most optimal counter would be to spread your strong Plants across the board, as Cryo Yeti can only stall two lanes maximum. Using cheap, strong plants such as Haunted Pumpking, Split Pea, or cheap units buffed by Three-Nut or Onion Rings are effective options

If going wide isn't an option, Grave Buster is an effective counter against him since it is cheap and can destroy him on the turn he is played, prevent Cryo-Yeti from even

Freezing a plant. If you don't have Grave Buster, Shamrocket or Eyespore would be your only other efficient options.

If you are using a

Freeze deck, you should be able to use Winter Squash. Or, you can Bounce this zombie to make your opponent lose tempo, although there is the

Freeze ability to worry about later. 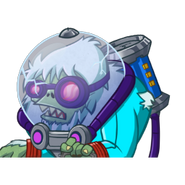 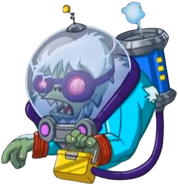 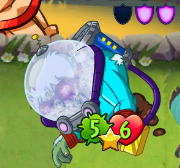 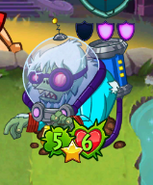 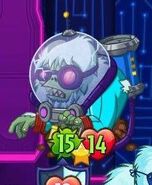 Gigantic-Cryo Yeti due to a glitch 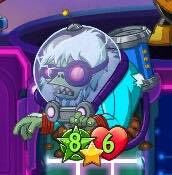 Cryo-Yeti with a star icon on his strength 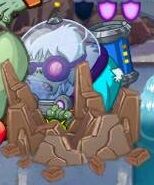 Rock Wall being played on Cryo-Yeti

Barrel of Barrels being played on Cyro-Yeti

Cryo-Yeti being the featured card on the menu for the August 27th, 2017 Daily Challenge

Cryo-Yeti on the background of the Galactic Gardens battlefield