Plant Evolution: Plants here and next door get +2

.
In the secret groves of Hollow Earth, Magnolias evolved to shun steely stoicism, boasting blunt barbarity.
Cro-Magnolia is a colossal rare plant card in Plants vs. Zombies Heroes and a member of the

It does not have any traits, and its Plant Evolution ability gives all plants on its lane and the lanes adjacent to it, including it, +2

Just like Steel Magnolia, it is based on the magnolia, a type of flower. Its petals also appear to be based on fossilized ferns, members of a group of vascular plants (plants with xylem and phloem) that reproduce via spores and have neither seeds nor flowers.

Its name is a portmanteau of "Cro-Magnon," a word used to describe the first early modern humans (early Homo sapiens sapiens) that lived in the European Upper Paleolithic, referring to its appearance and it being a Colossal Fossils card, and "magnolia," the real-life plant it is based on.

Its description is an allusion to its gentler face expression compared to Steel Magnolia, as well as the fossil patterns on its petals.

Cro-Magnolia, like most Evolution plants, is best used when played on another plant. It is best to play Cro-Magnolia when there is at least one vital plant on either side of the plant that is going to Evolve. If you successfully Evolve it, Cro-Magnolia becomes a 4

with a great ability. Otherwise, it is just a plant with average stats.

Each hero can use this card effectively:

plant that also boosts other plants for only 3

is a very dangerous one to be on the field. However, it does have a weakness, which is Rocket Science. If Cro-Magnolia is played a bit later, Screen Door Zombie can nullify Cro-Magnolia's attack and destroy it. But either way, you still have the boosted plants to deal with. Since the plants will be boosted en masse, prioritize the most threatening plant.

Like most Evolution cards, you cannot do much against its ability, but you can try to remove as many plants as possible so Cro-Magnolia cannot activate it. 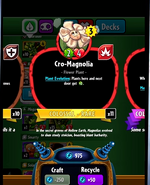 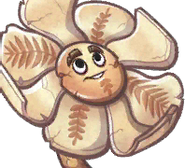 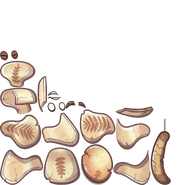 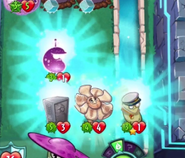 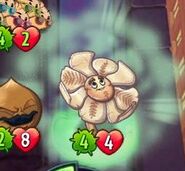