The Cricket Star with its fire abilities can prove to be quite an annoying opponent. The best way to deal with it is to take advantage of its slow movement speed and its lowered damage by taking pot-shots at it with the Peashooter. Cacti can also take advantage by staying back and lowering its already lowered damage and snipe it from a distance. 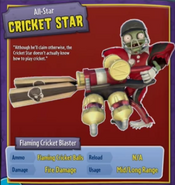 Retrieved from "https://plantsvszombies.fandom.com/wiki/Cricket_Star?oldid=1598744"
Community content is available under CC-BY-SA unless otherwise noted.