Cozmic Brainz is a Super Rare variant of Super Brainz in Plants vs. Zombies: Garden Warfare 2. He was previewed in the Multiplayer Beta trailer, whilst revealed in a screenshot on Gary Clay's Twitter page.[1] His "special ability" is that he can charge up punches. An uncharged punch deals 22 damage, and a half-charged punch will deal 49.5 damage. If he charges up a punch to level 3, which deals 77 damage, he will, if the enemy is defeated by the punch, cause a wormhole to momentarily appear behind the defeated enemy which the enemy then flies into before disappearing, making them unrevivable. His ranged attack is not a laser unlike other Super Brainz variants, it is actually a multi-projectile attack that deals 1 to 11 damage per shot, depending on the range.

"More than just a strange Zombie in a spandex body suit, with the help of his galactic bracelets, Cozmic Brainz wields powers unknown."

Hold down fire to charge his fists. Foes vanquished by a level 3 charge are banished and left unrevivable!

Cozmic Brainz is extremely useful as he can make Plants unrevivable with his attacks, delaying their return to the front line. He is also useful for stopping Plant teleporters being built as he can make the Roses that are building it unrevivable. This character's ability makes him great for game modes like Team Vanquish. Avoid only attacking with fully charged punches as it takes a while for them to charge (meaning that enemies can shoot you with little punishment).

To fully utilize your ability to "erase" plants from the map, try to inflict at least 55 damage to a plant before you try to vanquish them with a fully charged punch. If you get the flank on the enemy, let your first attack be a fully charged punch, then finish them off with normal punches (note that they can still be revived though).

It is also possible to use some of his abilities to perform this combo: using Cozmic Fists level three to attack the victim in front of him, a Heroic Kick to launch them, and finally, if possible, unleash the Super Ultra Ball at them as long as you aim perfectly.

Thanks to his buffs in the 2nd July 2018 patch, his 2nd level charge punch only has a charge time of .4 seconds. This makes his utilizing his 2nd charge his strongest form of damage, dealing 49.5 at a fairly high rate of fire. He can further utilize this by hitting a plant with a 3rd charge punch, and then hitting them with a 2nd charge punch for an extremely quick kill (assuming they have 125 or less health).

Cozmic Brainz is generally considered to be one of the weaker Super Brainz variants, due to his odd ranged attack and his punches being very weak without being charged. Even though this is the case, you should not drop your guard if you're on low health while near him, as he may have a punch charged up and send you straight to the death-cam while leaving unable to be revived. This trait of his level 3 Punch is very dangerous in Team Vanquish if you are badly injured, as his level 3 Punch, although uncommon to be pulled off, will give the zombies a guaranteed point. When fighting him, try to keep your distance as he is less effective when he is not near you. He is a big target and (for most players) should be easy to hit. Full-Auto plants like the Commando Pea are great counters, as Cozmic Brainz cannot usually keep up with them (damage wise). 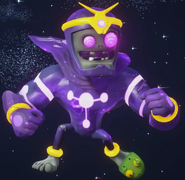 A close-up of Cozmic Brainz 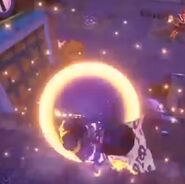 Cosmic Brainz's model
Add a photo to this gallery

Retrieved from "https://plantsvszombies.fandom.com/wiki/Cozmic_Brainz?oldid=2197318"
Community content is available under CC-BY-SA unless otherwise noted.