Rare
Count Chompula is very, very hungry. He's always looking for a Zombie feast. He regains health for every Zombie he swallows.

Rare
Count Chompula is very, very hungry. He's always looking for a Zombie feast. He regains health for every Zombie he swallows.
Count Chompula is a Rare variant of the Chomper in Plants vs. Zombies: Garden Warfare and Plants vs. Zombies: Garden Warfare 2. He heals himself by 50 health when he swallows and fully digests a zombie.

His name is a spoof of Count Dracula.

It is also a spoof of the cereal brand and mascot, "Count Chocula," which is also a Dracula spoof.

Vampiric Chomp is the primary weapon of Count Chompula. It deals the same damage as the regular Chomp (25 damage). However, after a zombie is swallowed and digested, Count Chompula will heal by 50.

Count Chompula is ideally suited towards roaming Chompers who like to operate behind enemy lines, on the outskirts of the map, and in other obscure locations, far away from teammates. However, it is recommended to auto-regenerate (if low on health) and then swallow zombies to get to full health faster. The ability to recover health independently by eating zombies makes surviving when away from Sunflowers much easier as you can gain more health on your own rather than just auto-regenerating to 50%, allowing you to operate alone for longer than usual.

On the contrary, though, Count Chompula loses some of his efficiency when close to allies, as the ability to recover health independently is rendered obsolete because Sunflowers can just as quickly heal you, and the 25 less health will eventually play against you.

The auto-regenerate is much different Garden Warfare 2, as you will still auto-regenerate after 50% health and continue auto-regenerating while shooting or using abilities, which makes this Chomper seem an even worse choice than other ones unless you get caught while chewing a zombie. Pairing this character with Vampweed would be a great idea because, with Vampweed, you recover an extra 40 health if a zombie stumbles into it. 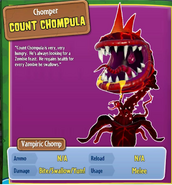 Count Chompula on the select screen