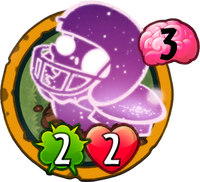 When played: Conjure a Sports card, and it costs 2

less.
He's been named Most Valuable Zombie of the Galaxy two years in a row!
Cosmic Sports Star is a galactic rare zombie card in Plants vs. Zombies Heroes and a member of the

. He does not have any traits, and his ability Conjures a sports card when he is played, and reduces its cost by 2

His appearance is based on All-Star Zombie.

His name is a combination and portmanteau of "cosmic," "sports," and "All-Star Zombie," referring to his appearance.

He's been named Most Valuable Zombie of the Galaxy two years in a row!

While his stats are below average for a 3

zombie, his ability can be potentially rewarding. Many sports cards are cheap; even a majority of the expensive cards only cost up to 4

to play. And if this card Conjures one, that card will cost significantly less, and will even be free in some cases.

Here is the list of all the cards that Cosmic Sports Star can Conjure, as well as the cost that will appear when they are Conjured.

Among these, Defensive End is perhaps the best zombie Conjurable by Cosmic Sports Star, as he can be played immediately the next turn, and he will be immune to most tricks for a few turns. Combine this with Gargologist, and he will cost even less. Other good zombies to Conjure are Planetary Gladiator, Brain Vendor, and Rodeo Gargantuar. However, he can also Conjure weaker ones like Baseball Zombie.

If you play as Neptuna or The Smash, you can Bounce him with Firefighter or Secret Agent respectively, in order to play him again and Conjure another sports card. Additionally, Neptuna can play him while Dr. Spacetime is on the field to reduce the cost further.

Cosmic Sports Star is relatively weak, and can be easily taken out with cards such as Morning Glory or Banana Bomb. However, his ability have a potential to be dangerous, and you should expect cheaper, or even free cards to come in your way. Because he is a Sports, it is best to get rid of him before the zombie hero plays Team Mascot to make him harder to remove and Zombie Coach, who can then protect the Conjured card, Cosmic Sports Star, and himself. 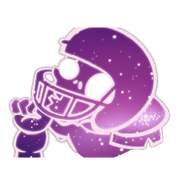 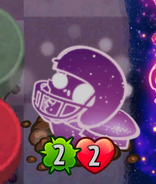 Cosmic Sports Star tinted gray due to a glitch

Cosmic Sports Star with the

Strikethrough trait due to Ice Moon 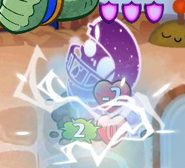 Giant Cosmic Sports Star due to a glitch 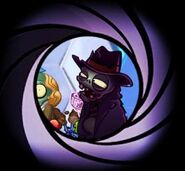 Cosmic Sports Star with a star icon on his strength