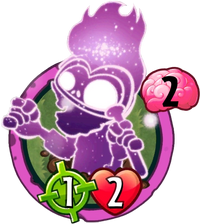 When played: Conjure a Science card, and it gets

Bullseye.
He has no idea what's in the beakers. He just likes to mix them together until they go BOOM!
Cosmic Scientist is a galactic rare zombie card in Plants vs. Zombies Heroes and a member of the

Bullseye trait, and his ability Conjures a science card when he is played and gives it the

Bullseye trait if it is not a trick or environment card, excluding Zombot's Wrath and Final Mission.

His appearance is based on Mad Chemist.

His name is a combination of "cosmic" and "scientist," referring to his appearance.

He has no idea what's in the beakers. He just likes to mix them together until they go BOOM!

While this zombie has slightly below average stats, his ability is truly what makes him shine. Any zombie he Conjures gains the

Bullseye trait, allowing it to do damage to the plant hero without charging the Super-Block Meter.

Due to the many cards in the science tribe, there are many different types of zombies that can be Conjured by him. A few examples of incredibly devastating zombies with

However, there is quite a high chance that Cosmic Scientist will Conjure a trick or environment, thus rendering the additional ability of giving the zombie

Bullseye utterly useless. He may also Conjure zombies that already have the

Bullseye trait such as Wormhole Gatekeeper. However, this does not mean the card Conjured will be useless, as he can Conjure useful tricks and environments like Laser Base Alpha, Area 22, and Rocket Science. There are also trick cards that are affected by his ability, such as Zombot's Wrath or Final Mission.

Bouncing this zombie with Firefighter or Secret Agent will allow this zombie to Conjure another science card. If you are Huge-Gigantacus or Super Brainz, you can also play Mixed-Up Gravedigger to reuse his ability.

Since this is a science zombie, it can get boosted by Zombot Drone Engineer, and activate Interdimensional Zombie's ability.

You can not stop this zombie's ability, but destroying this zombie will not be a problem as it only has 2 health and can be easily taken out with tricks like Berry Blast or Whack-a-Zombie.

Do not Bounce this unless necessary or it can ensure your win, as the zombie hero can replay this to Conjure another Science card.

Bullseye trait from them, but beware of zombies with "When played" abilities such as Gadget Scientist and Zombot 1000. 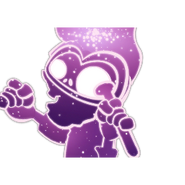 Gigantic Cosmic Scientist tinted gray due to two glitches at once

Cosmic Scientist with a star icon on his strength 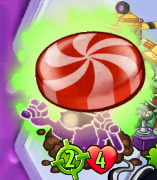 Cosmic Scientist next to Mad Chemist

Gigantic Cosmic Scientist due to a glitch