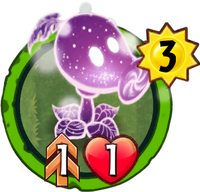 When played: Conjure a Pea, and it gets

Double Strike.
"The cosmos is so big and a pea is so small. The juxtaposition just really makes me think, you know?"
Cosmic Pea is a galactic rare plant card in Plants vs. Zombies Heroes and a member of the

Double Strike trait, and its ability Conjures a pea card when it is played and gives it the

Its appearance is based on Peashooter.

Its name is a combination of "cosmic" and "pea," referring to its appearance.

"The cosmos is so big and a pea is so small. The juxtaposition just really makes me think, you know?"

This plant has very poor stats for a 3-cost card. The

Double Strike trait with its health stat of 1 won't exactly help that much either. What this is good for is wearing out your opponent's block meter, as this can attack twice if in an empty lane. But other than that, it usually won't last. But its ability is the most unique part about it, similar to the other Cosmic cards. It will Conjure a pea and give it

Double Strike. This can range anywhere from a Peashooter to a Pod Fighter. Since this is a Mega-Grow card, a Threepeater, or whatever pea is Conjured, can easily be boosted and grow out of control. You can also play this while a Dino-Roar card like Bananasaurus Rex is on the field to activate its ability. However, Repeater and Gatling Pea can also be Conjured, which will nullify the part of giving the plant

Since all peas excluding Threepeater, Wing-Nut, and Gatling Pea have base stats below 4

, Onion Rings can be played to boost their base stats.

However, be careful to not play this in Total Eclipse, as doing so will cause Total Eclipse to destroy this plant before it can Conjure a pea, wasting 3 sun.

Like other cosmic plants, avoid playing it when there is a Quickdraw Con Man on the field, as he will deal 1 unblockable damage to you once it Conjures a card.

Statwise, this is not a threatening plant. Anything that can do damage can easily deal with this plant - in fact, it’s good to ignore it to let it charge up the block meter. Therefore, you should focus more on the card that it Conjures instead. The plants that you have to worry more with the

Double Strike trait are Black-Eyed Pea, Sting Bean (when boosted), and Threepeater, not to mention Gatling Pea. While Bonus Track Buckethead will nullify all the potential bonus attacks, you have to play removal cards if you don't have him.

You could alternatively use Quickdraw Con Man to make your opponent think twice before playing this card. 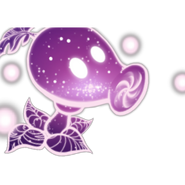 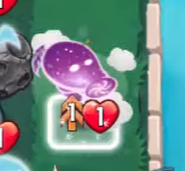 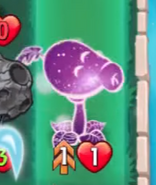 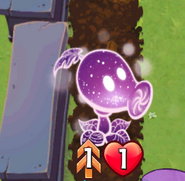 Gigantic Cosmic Pea due to a glitch 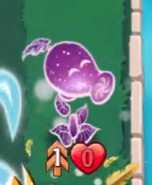 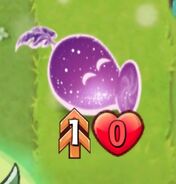 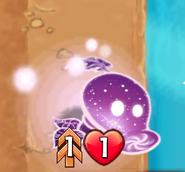 due to Onion Rings' ability