When played: Conjure a Mushroom, and it gets +2

.
He's far out all right. Like, waaaay far out.
Cosmic Mushroom is a galactic rare plant card in Plants vs. Zombies Heroes and a member of the

He does not have any traits, and his ability Conjures a mushroom card when he is played, and gives it +2

if it is a fighter card.

His appearance is based on Fume-Shroom.

His name is a combination of "cosmic" and "mushroom," referring to his appearance.

He's far out all right. Like, waaaay far out.

While Cosmic Mushroom's stats are not very efficient for its cost, his ability is what makes him useful just like all the other Cosmic variants. He can give you useful mushrooms from the Kabloom class like Mushroom Ringleader, Buff-Shroom, and Punish-Shroom, and from other classes like Sportacus, Sun-Shroom, Toadstool, and Grow-Shroom.

However, he could also give tricks and environments like Doom-Shroom and Mushroom Grotto that ignore the +2

bonus. Still, they are useful if you are using a mushroom deck.

His strength-boosting ability goes well with anything, especially with a few heavy-hitters such as the aforementioned Toadstool, as well as Smoosh-Shroom. However, it does interact negatively when you want to play Doom-Shroom.

You can also use Rescue Radish to Bounce him, so he can be played again and Conjure another mushroom. However, only Nightcap can do this normally.

Like other cosmic plants, avoid playing him when there is a Quickdraw Con Man on the field, as he will deal 1 unblockable damage to you once he Conjures a card.

Cosmic Mushroom himself isn't very much of a threat, but you should be prepared for any mushroom he Conjures, as your opponent could surprise you with something like Sportacus or Smoosh-Shroom.

Like other cosmic plants, the best way is to have a Quickdraw Con Man on the field to make the opponent think twice before playing him, as he will deal 1 unblockable damage to the plant hero once he Conjures a card. 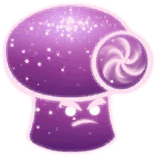 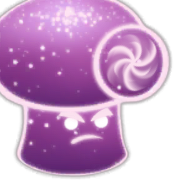 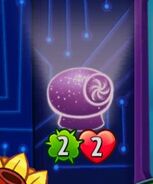 Cosmic Mushroom with the

Two Cosmic Mushrooms on a lane due to Pair Pearadise's ability

Cosmic Mushroom with the