When played: Conjure a Flower, and it gets

Strikethrough.
She enjoys the simple things in life - hanging out with friends, fighting Zombies, and basking in cosmic rays.

Cosmic Flower is a galactic rare plant card in Plants vs. Zombies Heroes and a member of the

Strikethrough trait, and her ability Conjures a flower card when she is played and gives it the

Strikethrough trait if it is a fighter card.

Her appearance is based on Sunflower.

Her name is a combination of "cosmic" and "flower," referring to her appearance.

She enjoys the simple things in life - hanging out with friends, fighting Zombies, and basking in cosmic rays.

While she has poor stats for her cost, Cosmic Flower can still make a meaningful impact with her

Strikethrough trait. But more importantly, her main strength is her Conjuring ability;

Strikethrough is a powerful trait, and you can obtain powerful or useful flowers like Soul Patch, Mayflower, Invasive Species, and Briar Rose. Even if you do get a weaker one like Morning Glory or Vanilla, they can still serve as a decent attacker and in niche situations. Unfortunately, there is also a good chance of her extra perk of giving

Strikethrough going to waste: Power Flower and Bloomerang already have the

Strikethrough trait, while Sunflower, Twin Sunflower, Lil' Buddy, Umbrella Leaf, and Witch Hazel cannot utilize said trait unless their strength is boosted. Reincarnation is also an example unless you were to play her right away (which is a waste in almost all cases), as she will lose the

Strikethrough trait once she transforms. And finally, Cosmic Flower can also Conjure tricks. But in any case, you have an extra card to work with, which is worth it.

Bouncing her with Rescue Radish can be helpful, as she can be replayed to Conjure another flower. However, only Rose can do this normally.

Like other cosmic plants, avoid playing her when there is a Quickdraw Con Man on the field, as he will deal 1 unblockable damage to you once she Conjures a card.

Cosmic Flower is very easy to destroy due to her low health, although her

Strikethrough trait gives you a bit more trouble. But beware of her Conjuring ability, as it could Conjure something detrimental to strategies like Soul Patch. Above all, do not Bounce this plant unless if she is blocking the final hit on your opponent, as they will be able to play her again and Conjure another flower.

Like other cosmic plants, the best way is to have a Quickdraw Con Man on the field to make the opponent think twice before playing her, as he will deal 1 unblockable damage to the plant hero once she Conjures a card. 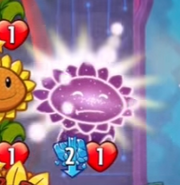 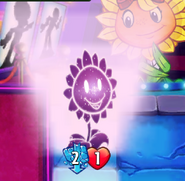 Cosmic Flower attacking from the player's point of view (1)

Cosmic Flower attacking from the player's point of view (2)

Cosmic Flower attacking from the player's point of view (3)

Cosmic Flower attacking from the opponent's point of view

Cosmic Flower tinted gray due to a glitch

Electrobolt being played on Cosmic Flower

Two Cosmic Flowers on a lane due to Pair Pearadise's ability

Cosmic Flower with a star icon on her strength

Cosmic Flower with the

Retrieved from "https://plantsvszombies.fandom.com/wiki/Cosmic_Flower?oldid=2249251"
Community content is available under CC-BY-SA unless otherwise noted.