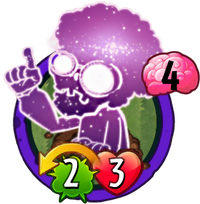 When played: Conjure a Dancing card, and it gets

Overshoot 2.
Across the cosmos, the passion for dance is the only universal language.
Cosmic Dancer is a galactic rare zombie card in Plants vs. Zombies Heroes and a member of the

Overshoot 2 trait, and its ability Conjures a dancing card when it is played, and gives it the

Overshoot 2 trait if it is not a trick card.

Its appearance is based on Disco Zombie.

Its name is a combination of "cosmic" and "dancer," referring to its appearance.

Across the cosmos, the passion for dance is the only universal language.

Despite having low stats for 4

, Cosmic Dancer has the

Overshoot trait in addition to being able to Conjure a dancing card with a bonus. Since Cosmic Dancer is a dancing zombie, it will benefit from Aerobics Instructor, who will increase its strength, and can also benefit Flamenco Zombie if you keep Cosmic Dancer alive. Disco-Naut will give Cosmic Dancer the

Bullseye trait, which will go in tandem with its

Overshoot trait. Binary Stars will also double the damage that is dealt by both its normal attack and the attack from its

If you are Impfinity, you can use In-Crypted, Mixed-Up Gravedigger, and Firefighter to reactivate Cosmic Dancer's ability. Electric Boogaloo can also do so with Secret Agent.

While you cannot stop it from Conjuring the extra dancing card, you can prevent it from attacking. Since it only has 2

, you can destroy it with Whack-a-Zombie. With 3

, it can also be taken out with Berry Blast. However, be careful of the dancing card it Conjures as it can be dangerous, especially with the added

Unless you can win this turn or it is necessary, do not Bounce it, as the zombie hero can reactivate its ability. Also, do not bother reducing its strength to 0, as its

Overshoot trait will still damage you. 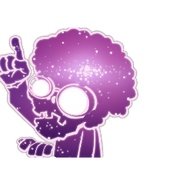 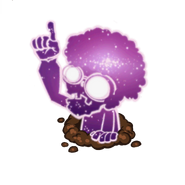 Cosmic Dancer on the background of the Galactic Gardens battlefield 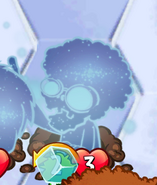 Gigantic Cosmic Dancer due to a glitch

Cosmic Dancer with the