When played: Conjure a Bean, and it gets Team-Up.
It IS a magical fruit!
Cosmic Bean is a galactic rare plant card in Plants vs. Zombies Heroes and a member of the

Its appearance is based on Laser Bean.

Its name is a combination of "cosmic" and "bean," referring to its appearance.

Its description references the children's song called Beans, Beans, the Magical Fruit. It may also reference the achievement with the same name in Plants vs. Zombies 2.

It IS a magical fruit!

Cosmic Bean has low stats for its cost, but it is cheap and benefits bean decks a lot for not only being a bean, but also Conjuring another bean to synergize with Bean Counter or Admiral Navy Bean. You can even get strong beans from other classes such as Black-Eyed Pea, Moonbean, Laser Bean, and Espresso Fiesta, allowing you to surprise your opponent. The Team-Up trait it gives is also useful as many beans have useful abilities and would welcome protection behind a plant, and also grants another plant that allows Go-Nuts to activate their ability again. However, you may also get cards that are not affected by its second ability like Admiral Navy Bean or Navy Bean which already have Team-Up, or non-fighters like Espresso Fiesta and Coffee Grounds.

If you are playing as Green Shadow, you can use this with Captain Cucumber to get a bean card at a lower cost, as well as boost Bananasaurus Rex and Apotatosaurus' stats.

You can Bounce Cosmic Bean by playing Rescue Radish to Conjure another bean as well.

As for this plant itself, it should only be used as a weak shield for another plant or fodder for Go-Nuts, which it is good at thanks to its Team-Up trait. It can also be useful as a cheap throwaway plant against strong zombies with low health, such as Cuckoo Zombie.

However, due to its low health of 1, avoid playing this on Total Eclipse as Total Eclipse's ability takes priority over Cosmic Bean's ability, destroying Cosmic Bean before it can Conjure a bean card.

Like other cosmic plants, avoid playing it when there is a Quickdraw Con Man on the field, as he will deal 1 unblockable damage to you once it Conjures a card.

While this plant isn't threatening statwise, there are some beans you must beware of, namely Espresso Fiesta, Moonbean, and Jelly Bean. Therefore, it is better to focus on the Conjured bean instead of this, unless it is a trick card or your opponent chooses to boost this. Also, try not to Bounce this unless you can win or it has become a huge threat, as your opponent can replay it to Conjure another bean and to reactivate Admiral Navy Bean and Bean Counter's abilities.

Like other cosmic plants, the best way is to have a Quickdraw Con Man on the field to make the opponent think twice before playing it, as he will deal 1 unblockable damage to the plant hero once it Conjures a card. 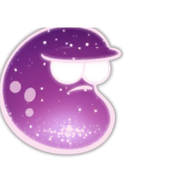 Cosmic Bean with the

Cosmic Bean on the background of the Galactic Gardens battlefield