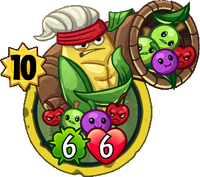 When played: Make a random Plant in each other lane.
Thanksgiving came early this year.
Cornucopia is a premium legendary plant card in Plants vs. Zombies Heroes and a member of the

. It does not have any traits, and its ability makes a random plant from the entire game, including another Cornucopia, on every lane excluding the lane it is on and the lanes occupied by a non-Team-Up plant.

It is based on an ear of maize (Zea mays), also known as corn, a type of large grain plant; the cornucopia (also called the horn of plenty), a symbol of endless abundance and nourishment, commonly a large horn-shaped container overflowing with produce, flowers or nuts; and a bazooka, a man-portable recoilless anti-tank rocket launcher weapon.

Its appearance is a pun on the word "corn" in its name, as Cornucopia is literally a cob of corn holding a cornucopia.

Its description is a reference to the fact that the cornucopia is a popular symbol of Thanksgiving.

Cornucopia is a powerful plant with a potentially game-changing ability. However, it is an extremely expensive plant to play, and you will not get a chance to play it in most situations. It is recommended to use a deck that generates lots of sun to play it earlier.

It is best to play Cornucopia when almost all lanes are empty, as it does not fill lanes with a plant already in them, unless they have the Team-Up trait, which in that case, Cornucopia will make them behind those plants. If you are playing as Solar Flare, you can play Pineclone after you play Cornucopia to make the created plants stronger if they are weaker than Pineclone. However, keep in mind that Cornucopia itself will be transformed too, so only use it when the total strength of the Pineclones is more than the total strength of your original plants. Molekale can also be played by Solar Flare after using Cornucopia if it makes a lot of high-cost plants to make them even stronger, and Cornucopia is not transformed since there are no plants that costs 11 sun. You can also use this with Astro-Shroom to do 3 damage to the zombie hero. You can Bounce Cornucopia with Rescue Radish to play it again as Rose, but it is unlikely that you would need to play him again. Since every plant made by Cornucopia counts as playing a plant, Muscle Sprout benefits from it greatly. However, this also means that there is one less lane for Cornucopia's ability to take place in, and only Chompzilla can do it normally.

However, Cornucopia's ability is extremely luck-based. While it can make amazing plants like Guacodile or even legendary plants like Kernel Corn or Bananasaurus Rex, it can also make weak plants like Lil' Buddy or Peashooter, or plants that do not synergize with your deck, such as Admiral Navy Bean in a non-bean-based deck. Pineclone made via Cornucopia can also be dangerous as it may weaken your other strong plants made (including Cornucopia itself), and it may even transform plants with strong abilities such as The Great Zucchini into Pineclones before said abilities take action. Either way, it is a good plant to block damage in unprotected lanes, as well as filling out aquatic lanes which is especially helpful for Solar Flare and Chompzilla, as both lack Amphibious plants.

Due to its ability, it can help bring you to back to the game if Zombot 1000 destroys your defenses. Although it can not carry you by itself, it makes other plants that can stall you for some time to make a comeback. However, Immorticia's Teleport/Teleportation Zombie + Zombot 1000 combo renders this useless, unless Cornucopia luckily makes a Brainana.

On top of Cornucopia's stats being high, it can also make other dangerous plants that can seriously threaten you. Make sure you have tricks that do damage to multiple plants at once to get rid of all of them really quickly. If you're lucky and your opponent only managed to get low health plants or those with low strength, then dealing with Cornucopia itself and the plants shouldn't be a problem since Weed Spray and The Chickening can get rid of the plants while Rocket Science and Locust Swarm can deal with Cornucopia. The Chickening combined with Zombot Sharktronic Sub is a deadly combo, and can easily take out all the plants made by Cornucopia, including Cornucopia itself. An alternative method is to play Zombot 1000, although this only can be used on the next turn unless you are either combining it with Teleport/Teleportation Zombie or Cursed Gargolith, or happen to get it through Gargantuars' Feast. If you don't have any way of instantly destroying the plants made by Cornucopia,

Deadly zombies would be your next best option, although they are highly susceptible to the plants' "When played" abilities.

However, the best way is to finish the battle before your opponent can play one. Removing sun-producing plants is a priority, as they allow your opponent to play it earlier.