None
"Who's a good vegetable? You are! Yes, you are!"
Corn Dog is an event plant card in Plants vs. Zombies Heroes and a member of the

It has the Amphibious and Hunt traits and does not have any abilities. Its closest zombie counterpart is Dog Walker.

It was added in update 1.16.10 for the Summer Nights Weekly Event, along with Clique Peas, Sap-Fling, Synchronized Swimmer, King of the Grill, Trapper Zombie, and the Galactic Gardens set.

Its name is based on a corn dog, an American snack consisting of a sausage coated in a thick layer of cornmeal batter on a stick. However, Corn Dog's design is a literal take on its name, being a combination of an ear of maize (Zea mays), also known as corn, and a dog (Canis lupus familiaris), a subspecies of the wolf.

Its description references the fact that it is a vegetable dog. It is also based on the common quote, "Who's a good dog? You are! Yes, you are!" that people say to their pet dog if it is behaving well.

Corn Dog has the same stats as a Fire Peashooter, but it can track down zombies and can go even on aquatic lanes. As such, is a good counter to Teleport, Teleportation Zombie, Beam Me Up, and Hail-a-Copter, since it prevents the zombie played from hitting you by going in front of it.

Since Corn Dog has low health and will always be confronted with a zombie unless none are played, it will not last very long, often getting destroyed on the same turn it is played.

Use tricks like Beam Me Up to destroy it on the same turn or just play a zombie to drag it out of the aquatic lane. If not, tricks like Bungee Plumber can easily do the job due to its low health. Try to take it out or else it will mess up your strategies. 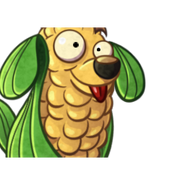 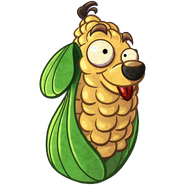 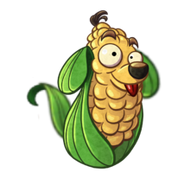 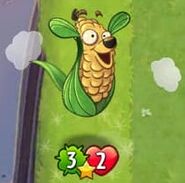 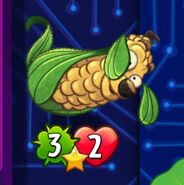 Corn Dog being the featured card in the menu for the June 24th, 2017 Daily Challenge

Corn Dog being the featured card in the menu for the July 6th, 2017 Daily Challenge

Corn Dog being the featured card in the menu for the July 10th, 2017 Daily Challenge

Corn Dog on the advertisement for the Weekly Events