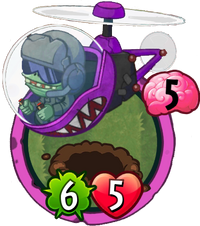 None
Refuses to fly over water due to a severe case of aquaphobia.
Copter Commando is a colossal uncommon zombie card in Plants vs. Zombies Heroes, and a member of the

Brainy class. It can also be made by Hail-a-Copter. It costs 5

. It does not have any traits or abilities. Its closest plant counterpart is Smashing Pumpkin.

Its description makes a reference to how Copter Commando does not have the Amphibious trait despite being a helicopter that can fly over water, as aquaphobia is a type of phobia that involves persistent and abnormal fear of water.

Refuses to fly over water due to a severe case of aquaphobia.

This zombie is very powerful, with 6

, and can be played in the Zombie Tricks phase via Hail-a-Copter. That way, you can choose which lane you want to play it in without worrying about what your opponent can do for that turn. But otherwise, it is just a zombie with average stats and no abilities.

Being in the science tribe, Copter Commando can also benefit from Zombot Drone Engineer and Gadget Scientist, as well as activate Interdimensional Zombie's ability, making it even more effective. It can also benefit from Toxic Waste Imp and Imp Commander as it is also a part of the Imp tribe, but these combos are only normally possible with Super Brainz or Huge-Gigantacus, and won’t matter that much due to his already high strength to kill plants, and card draw being irrelevant by turn 5.

This zombie is really powerful due to being normally played in the Zombie Tricks phase, and you have to be careful when your opponent saves more than 5

in the Zombies Play phase. Cards like Squash and Sizzle can destroy it easily. You can also Bounce this zombie, so whenever your opponent wants to play this card again, they will be forced to play it in the Zombies Play phase, where it is more susceptible. If you can predict Hail-a-Copter being played, use Brainana, Dark Matter Dragonfruit, or even Forget-Me-Nuts to prevent it from being played. You can also use Shamrocket to destroy this zombie instantly. If you choose to use damaging plants alone, destroy any Toxic Waste Imps before you try.