Conehead Zombie is a zombie in Plants vs. Zombies: Garden Warfare and Plants vs. Zombies: Garden Warfare 2. Its plant counterpart is the Pumpkin Weed. It is a Spawnable Zombie in Gardens & Graveyards and Taco Bandits, while it is an invader in Garden Ops. It has slightly more health than a standard Browncoat Zombie and attacks in the same manner. In Garden Ops, there is a Pirate version which only appears in Sharkbite Shores, and Port Scallywag. Its attacks are Zombie Hurt and Hard Rock Toss. Each Zombie Hurt attack deals 15 damage, and each Hard Rock Toss deals 25 damage.

Has slightly more health than the standard Zombie Browncoat.

A Conehead Zombie has more or less than 127 health.

Conehead Pirate on the right of the Barrel Pirate 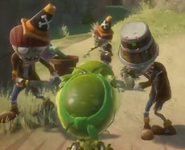 Two Conehead Pirates along with a Buckethead Pirate attacking a Peashooter

Conehead Zombies with other zombies

Icon shown during the mission Balloon Baffoons
Add a photo to this gallery
Retrieved from "https://plantsvszombies.fandom.com/wiki/Conehead_Zombie_(Spawnable)?oldid=2263025"
Community content is available under CC-BY-SA unless otherwise noted.