Image implying that Conehead Zombie will appear in Plants vs. Zombies Adventures. 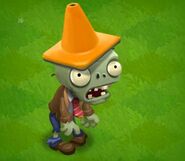 A Conehead Zombie in game

Retrieved from "https://plantsvszombies.fandom.com/wiki/Conehead_Zombie_(PvZA)?oldid=1157911"
Community content is available under CC-BY-SA unless otherwise noted.