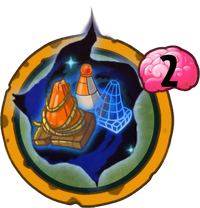 .
You are about to enter another dimension. A dimension not only of sight and sound, but of cones.
Cone Zone is a galactic uncommon zombie environment card in Plants vs. Zombies Heroes and a member of the

to play, and its ability gives any zombie in it +3

. This ability persists until Cone Zone is overridden by another environment.

It is based on the different roadcones that the zombies wear in Plants vs. Zombies 2.

It is named after the 1959 TV series The Twilight Zone.

Its description is a reference to the opening narration of the last four Season 1 episodes of the aforementioned series. The original quote is: "You are about to enter another dimension, a dimension not only of sight and sound but of mind. A journey into a wondrous land of imagination. Next stop, the Twilight Zone!"

You are about to enter another dimension. A dimension not only of sight and sound, but of cones.

This environment only costs 2

, so you can use it to protect your valuable early-game zombies from being destroyed such as Gargologist. You can also use it on

Armored zombies like Conehead or Buckethead to improve their survival. Planetary Gladiator is especially useful with this environment, as you will be very well protected. Usually, on the early turns, your opponent can have Berry Blast or Fire Peashooter to take your zombies out. However, with the additional health, they have a chance to survive that turn and at the next turn, you can play tricks to make them have more health and stay alive that way. However, keep an eye on

Smarty classes that can instantly destroy a zombie or lower their stats.

You will want to note that if you move a zombie out from that environment, it will lose -3

The environment boosts the health of a zombie by 3, which can be especially dangerous if that zombie is the crux of a specific deck, such as Gargologist in a Gargantuar deck or Team Mascot in a sports deck. In that case, try to replace that environment with one of yours to remove the health boost. You can also move zombies out of the environment using Banana Peel or Whipvine to make them also lose their health, but keep in mind that the zombie hero can play another zombie in that environment. 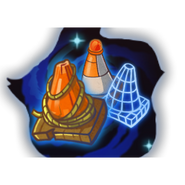 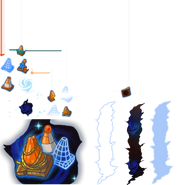 Cone Zone on the field

Gigantic Cone Zone due to a glitch