The Commando Pea grew up in the jungles and is the toughest pea there is-a one Peashooter army that will never run from a fight.

The Commando Pea can be thought of as a Foot Soldier and All-Star breed with Peashooter abilities. With the trade off having 75 HP less health and less accuracy. Commando Pea, compared to the All-Star, does not take a time to begin firing, does not lower in speed while firing, can jump while firing, and does not take a time to fully stop firing before regaining speed. Compared to Foot Soldier, while less accurate, with more damage per bullet and a lower fire rate, he does not burn through his magazine as easily and makes less noise when firing.

Commando Pea works well in ambush situations. Use your small size to your advantage and hide. Stay hidden and only strike one zombie at a time. Do not be afraid to take a hit, as an enemy is likely to flee before you do. Try getting close to zombies and using hyper when noticed to evade enemy shots.

It is wise to avoid long-range combat and instead get close before attacking. Never fight more than two zombies at a time unless you have a backup plan or you are receiving support from other plants. When playing this variant in Garden Warfare 2, it may be important to use the zoom upgrade, for the Commando Pea's close range weapon when facing an enemy from far away, though it may be not needed for the hyper ability.

Watch out for Commando Pea. Whether he is ambushing you or directly attacking him is a powerful foe. A 1v1 against him is the last thing you want, so try fighting him at long range where his primary weapon will lose a great deal of accuracy and thus become much less harmful. In close quarters, attack in teams, this will give you the edge since Commando Pea lacks skills to harm multiple Zombies other than Chili Bean Bomb. 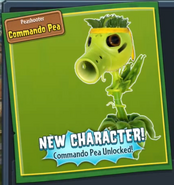 HD Commando Pea
Add a photo to this gallery

Retrieved from "https://plantsvszombies.fandom.com/wiki/Commando_Pea?oldid=2023770"
Community content is available under CC-BY-SA unless otherwise noted.