Legendary
"Commando Corn leads the elite combat group known only as the Commando Crops. Raised and nurtured in the battlefield trenches, he's developed a fearsome battle prowess that has earned him respect among his peers. If you have a problem.... if no one else can help.... and if you can find him.... maybe you can hire.... Commando Corn."
Commando Corn is a Legendary variant of Kernel Corn in Plants vs. Zombies: Garden Warfare 2 which was added in the Frontline Fighters DLC. He fires slower than the standard Kernel Corn, but his shots deal splash damage, similar to the Rugby Star. His Legendary mode is called 'Full Commando', and when it is activated Commando Corn's ammo clip will increase, from 20 to 50, as well as giving him increased speed.

"Commando Corn leads the elite combat group known only as the Commando Crops. Raised and nurtured in the battlefield trenches, he's developed a fearsome battle prowess that has earned him respect among his peers. If you have a problem.... if no one else can help.... and if you can find him.... maybe you can hire.... Commando Corn."

The primary weapon of the Commando Corn is the "Baby Corn Buster". It has a rather slow fire rate and has a clip size of 20. The reload speed is noticeably long. It makes up for these flaws with its high damage (dealing 15 damage per direct hit). It also deals 2 splash damage against Zombies.

Be aware that the Commando Corn's splash damage radius is not that big and will not account for a completely missed shot. His legendary meter also makes him more potent than other Kernel Corn variants, but the player needs to be very accurate with their shots. It is also good to go for bigger groups if you are farther away from the enemy because of its splash damage and good accuracy.

Although he may have a slower fire rate, Commando Corn can do what other Kernel Corn's variants cannot do: splash damage. With his splash damage, you can take on a group of zombies at once instead of vanquishing them one by one. Note that this only slightly injures Zombies that aren't directly hit by your shots. Aim for the biggest Zombie in the area as they are easiest to hit. For really accurate players, go for Imps whenever you can. Imps can get vanquish by 5 direct hits from your primary weapon. Make sure to reload every time you vanquish an enemy to ensure that you have enough ammo in your clip for your next target. Vanquishing normal AI Zombies and Zombie Turrets are great ways to quickly fill up your Legendary meter. If you manage to successfully fill your meter, DO NOT RELOAD AFTER EACH VANQUISH. Your magazine size increases from 20 to 50 for the duration of the Legendary meter, meaning that you have plenty of ammo to take on multiple Zombies.

Even though the Commando Corn has splash damage, he is more of a precision character. He only does big damage to you if he manages to directly hit you. Try to move unpredictably to make it hard for him to hit you. Note that his missed shots will probably damage you anyway (but only slightly). Ice variants are very effective against this plant as he is big and easy to hit. 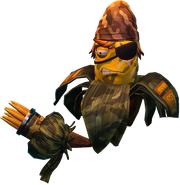 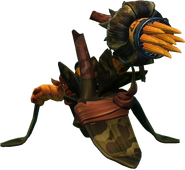 Commando Corn in the customization booth 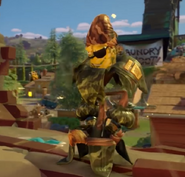