Immune to frost in Frostbite Caves

Ten Puzzle Pieces or buy it in the 1.9.1 update event

Cold Snapdragon is an ice-based version of Snapdragon, capable of spraying ice mist in a 3x2 area in front of himself, dealing identical damage to Snapdragon's fire attack and also slowing affected enemies, and reducing their movement and attack speed by 50%. He is immune to all freezing effects on his own and does not generate heat to thaw nearby plants.

Cold Snapdragon is based on Snapdragon, which is in turn based on the real-life snapdragons, plants from the Antirrhinum genus. This contrasts their fire and ice capabilities. His name is also a portmanteau of the term "cold snap" and "snapdragon".

Cold Snapdragon's costumes are both related to coldness: strawberry ice cream and an ice block (the bow with the ice block is presumably to prevent it from sliding off the head of the Cold Snapdragon).

Area: slows and damages zombies in the 6 tiles in front of it

When fed with Plant Food, Cold Snapdragon will release a powerful blast of ice in a 3x3 square in front of itself, similarly to Snapdragon. While the ice blast is slightly weaker, capable of dealing only 1200 damage per shot compared to Snapdragon's 1800, it can also freeze surviving targets and disable them for 10 seconds. Zombies from Frostbite Caves are resistant to this freezing effect, getting chilled instead. Attacking with fire based plants will remove the freezing effect. 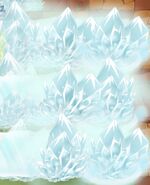 When boosted by Winter-mint, Cold Snapdragon's damage will be increased to 180 DPS, and its plant food effect's DPS will increase to 4000 DPS.

Generally speaking, Cold Snapdragon can be considered a nearly direct upgrade to the Snapdragon, as it exceeds its counterpart in some important aspects while maintaining the same sun cost. The former's ice-based attack can slow enemies down in addition to damaging them, and therefore can suppress the approaching horde much better than the latter's fire breath. To put in comparison, two full rows of Cold Snapdragons is capable of defeating Buckethead Zombies and outmatching Winter Melon in close combat, while two full rows of normal Snapdragons can only defeat Conehead Zombies. Cold Snapdragon's attack also extinguish Explorer Zombie's torch and Prospector Zombie's dynamite, along with adding ice effects to the zombies, allowing the plant to be used in tandem with other ice-based plants. It can also defeat Imp Dragon Zombies, unlike its fiery counterpart. Cold Snapdragons are also useful against T. Rex as they can disable zombies with T. Rex's boost effect. Cold Snapdragon is an excellent choice against Mecha-Football Zombies and Punk Zombies as they will not eat the plant and will push it instead, allowing the Cold Snapdragon to continue attacking them. It also works great against Glitter Zombie as they can slow her down and allow other zombies behind her to be exposed.

Cold Snapdragon is a good choice in the Dark Ages. It can defeat Jester Zombies very easily with their ice mist. In addition, it works very well for slowing down crowds of zombies, especially high health zombies such as Knight Zombie, as well as, those who spawn in the Necromancy ambush.

Cold Snapdragon is particularly useful in Frostbite Caves due to a unique feature no other non-fire plant possesses (other than Missile Toe): neither the freezing wind nor Hunter Zombie's snowballs can freeze or disable Cold Snapdragon. In addition, Cold Snapdragon can abuse the slider tiles to great effect due to its attack area, and its attack's area of effect nature and slowing effect makes the plant an ideal counter to Weasel Hoarders and their Ice Weasels. It should be noted however, that its Plant Food ability cannot completely freeze enemies in the aforementioned world. Also note that it cannot unfreeze any frozen plant nearby, and that the presence of the necessary fire plants may negate the slowing chill effect.

Cold Snapdragon is a great choice in Endless Zones due to their high damage profile for a low sun cost of 150, and their area of effect means that they can suppress enemies easily, with power relatable to that of Winter Melon. However, it beats the latter in terms of close quarters combat, as six Cold Snapdragons in two columns can deal much more damage than two Winter Melons in the same lane. Cold Snapdragon is also an excellent plant to deal with sandstorms, as planting them at the third column, protected with the Infi-nut's force field, can quickly eliminate the zombies, allowing Winter Melons to direct their damage to the advancing zombie horde. It is also a good choice to defend against Imps thrown by Gargantuars; along with the Infi-nut's force field, Cold Snapdragon can make short work of Imps. Since they are very disposable, they are also an excellent early setup plant. Perhaps, the most challenging Endless Zone for a Cold Snapdragon is Highway to the Danger Room. Portals can appear in front of the Cold Snapdragon and spawn threats like Explorer Zombie, Barrel Roller Zombie, Pianist Zombie, Wizard Zombie, Surfer Zombie, Octo Zombie and Excavator Zombie who can immediately destroy or render it useless without eating it. 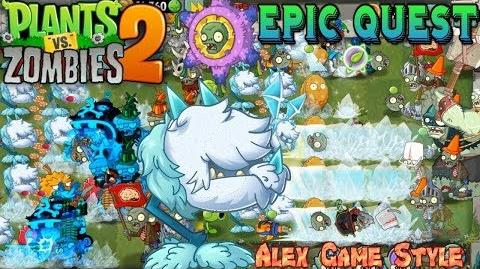 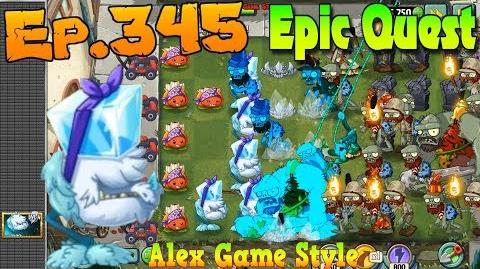 Specific to Chinese version (China only)

Retrieved from "https://plantsvszombies.fandom.com/wiki/Cold_Snapdragon?oldid=2229497"
Community content is available under CC-BY-SA unless otherwise noted.