Double Strike.
Nothing wakes you up in the morning like extra attacks on zombies. Well OK, coffee does.
Coffee Grounds are a galactic uncommon plant environment card in Plants vs. Zombies Heroes and a member of the

to play, and their ability gives all plants in them the

Double Strike trait. This ability persists until it gets overridden.

They are based on the real meaning of coffee grounds, the waste product after brewing coffee.

Them being an environment may be a visual pun on the word "grounds," as Coffee Grounds are literally a ground lane with coffee beans.

The fact that Coffee Grounds give the

Double Strike trait is based on the caffeine in coffee keeping anyone awake.

Nothing wakes you up in the morning like extra attacks on zombies. Well OK, coffee does.

Giving any plant in them a very powerful trait while costing little, Coffee Grounds is a good addition to almost every deck.

Due to the nature of the

Double Strike trait, preferred plants are hard-hitters, whether natural or boosted, so that they are able to do massive damage in a turn. It is possible that a hard-hitter here can destroy a Zombie here on its first attack and, assuming it survives, deal heavy damage to the Zombie Hero on the second attack.

And within those hard-hitters, those with abilities that activate when they do damage like Blooming Heart and Mars Flytrap or an offensive trait like Astrocado, or those that attack on multiple lanes like Shooting Starfruit are especially preferred.

In the end, the only plants you should avoid having in them (unless you had to override a zombie environment) are the ones who naturally have the

Double Strike trait, such as Bananasaurus Rex and Cosmic Pea. And just like any card that grants bonus attacks, you can use this environment in tandem with Party Thyme, who will be able to draw cards.

Green Shadow can also use them with Admiral Navy Bean and Bean Counter since they are a bean card.

However, Coffee Grounds have their counters, being Gargantuar Mime and Bonus Track Buckethead: the former will take advantage of your bonus attacks and do some himself (unless you put an Imitater in here, which is a very weak plant anyways), while the latter will prevent all bonus attacks. They can be overridden just like any environment too, so do not solely rely on them to win.

Having one or both of the Plants being Bullseye helps, however, the only Bullseye Plants are in the Guardian and Kabloom classes, so only Grass Knuckles and Captain Combustible can do this normally.

Speaking of Captain Combustible, he can also play Invasive Species here for massive damage as early as turn 3 because of the strength boost it gets while in an environment plus the newly gained Double Strike from Coffee Grounds for a whopping 10 damage (If not blocked).

If you see a plant with high strength in this environment, override that environment with one of yours, or remove that plant as soon as possible, because otherwise, you will take too much damage to make an effective comeback.

Alternatively, you can play Bonus Track Buckethead to make this environment useless or Gargantuar Mime to copy your opponent's plants' bonus attacks and defeat your opponent before they defeat you. 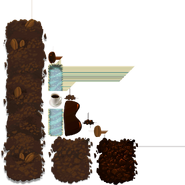 Three Coffee Grounds on the ground

Gigantic Coffee Grounds due to a glitch