For other uses, see bean.

Use Coffee Beans to wake up sleeping mushrooms.

Can be planted over another plant, wakes up mushrooms

Nocturnal plants during the day

After beating Level 5-3
"Hey, guys, hey!" says Coffee Bean. "Hey! What's up? Who's that? Hey! Didja see that thing? What thing? Whoa! Lions!" Yep, Coffee Bean sure does get excited.
Coffee Bean is a plant in Plants vs. Zombies that allows the player to use mushrooms during the Day, Pool, and Roof levels by waking them up. To use it, the player must plant the Coffee Bean on a sleeping mushroom.

The mushrooms are very cheap, but 75 sun is a lot to pay to wake them up. He is only useful with special mushrooms, like the Magnet-shroom, Gloom-shroom, Hypno-shroom, Ice-shroom, or Doom-shroom. Another useful tactic is to plant a couple of instant-use mushrooms if you know you will need them later. When you are ready to use them, just plant a Coffee Bean on them when you need the effect. This successfully eliminates the packet recharge because if you plan it right, you can use a pre-planted mushroom and a current mushroom back-to-back. Some combinations with Coffee Beans are only useful for getting achievements, like the Sun-shroom and Scaredy-shroom. On the contrary, Ice-shrooms and Doom-shrooms can be pre-planted and activated with a Coffee Bean later.

Coffee Beans are extra helpful during the Versus Mode, as he only costs 25 sun to use them. Thus, you can get cheap shooters like Scaredy-shrooms for only 50 sun, much less than other shooters.

In order to get the achievement Good Morning, you need to beat a Day, Pool, or Roof level using only mushrooms. Coffee Beans are essential, as it is the only way to make mushrooms wake up. The falling sun from the sky helps to plant the Coffee Beans, and once you have a sufficient amount of Sun-shrooms, they will help generate the sun to wake up the Scaredy-shrooms, Fume-shrooms, or any other mushrooms you will use.

Online Almanac entry (note how it has wings)

A left-facing Coffee Bean in the Zen Garden 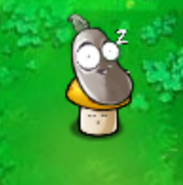 The player got a Coffee Bean

Coffee Bean plush
Add a photo to this gallery

Retrieved from "https://plantsvszombies.fandom.com/wiki/Coffee_Bean_(PvZ)?oldid=2356843"
Community content is available under CC-BY-SA unless otherwise noted.