Can fire a corn cob onto anywhere on lawn.

On impact, explodes in medium area

Just how did the Cob Cannon the Colonel of Texas come by? Well, he once studied at Harvard and worked at a New York-based law firm, but don't ask me why a lawyer would eventually go to Area 51, after all, this is an era when blind men can be lawyers.

Cob Cannon is a monthly special plant in the Chinese version of Plants vs. Zombies 2. He was first introduced in the 2017 New Year event.

He works like how he did in the original Plants vs. Zombies, to the point where he is an upgrade plant rather than his own individual plant and can be tapped to fire huge cobs that deal massive damage in a 3x3 area before needing to recharge.

He requires being planted on two side-by-side Kernel-pults in order to be planted on the lawn.

In addition to launching a corn cob, the corn's husk will turn into a missile that homes in to the zombies after all kernels are scattered.

His usage has remained unchanged since his introduction into the game. Hence, the same strategy from the first game will also apply here.

Use Plant Food on the Cob Cannon if the zombies are getting close to the Cob Cannon while he is still recharging but be careful not to use it in obstructive environments such as Kongfu World (Weapon Stands) and Ancient Egypt (Tombstones) as the obstructions can block the kernels and can prevent effectiveness of all the kernels. Just remember that his plant food effect can only activate via Power Tiles if the tile is on the back square, otherwise, he will not be affected.

Cob Cannon about to fire

Cob Cannon about to cooldown 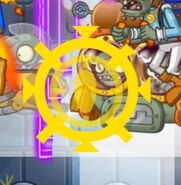 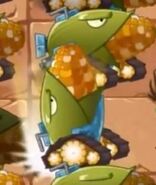 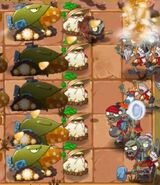 Cob Cannon on a Power Tile 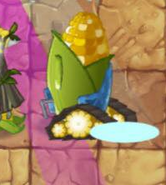 Cob Cannon with its costume on an advertisement 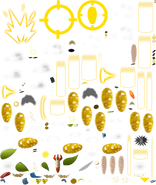 Retrieved from "https://plantsvszombies.fandom.com/wiki/Cob_Cannon_(PvZ2C)?oldid=2281213"
Community content is available under CC-BY-SA unless otherwise noted.