Coal Miner Zombie was pushing the wheelbarrow in and out every day, only for one day to find out that the gold mines can get rich overnight. This situation continued for 365 days and nights.

Coal Miner Zombie is the third and final unique zombie in Steam Ages in the Chinese version of Plants vs. Zombies 2. When he encounters a plant for the first time, he will destroy the plant by pouring coal on it, making the tile unable to be planted on until the coal disappears. When he is defeated or after he pours his coal, he will leave his wheelbarrow on his tile which acts as an obstacle, similar to Surfer Zombie. However, the coal cannot be destroyed, unlike the wheelbarrow.

Coal Miner Zombie absorbs 2490 damage per shot and degrades at 2000 where the wheelbarrow is destroyed and 2245 when he loses his arm before being defeated.

Coal Miner Zombie is a pretty fast zombie with its wheelbarrow. Not only that, but its wheelbarrow also absorbs a lot of damage for it. The best way to severely degrade the zombie is by planting a cheap plant in front of it such as a Puff-shroom. 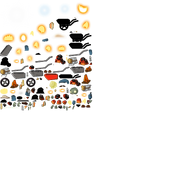 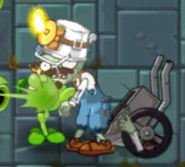 Coal Miner Zombie without his wheelbarrow (notice the arm) 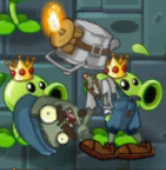 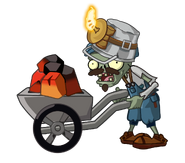 You can't plant on coal 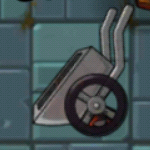 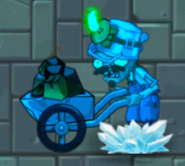 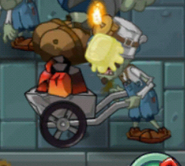 Concept
Add a photo to this gallery

Retrieved from "https://plantsvszombies.fandom.com/wiki/Coal_Miner_Zombie?oldid=2373759"
Community content is available under CC-BY-SA unless otherwise noted.