Co-op Bowling is the fifth level on Co-op Mode, which is a console exclusive version of the regular Wall-nut Bowling. As an addition, the player can also butter the zombies by pressing the "X" button, it will paralyze the selected zombie. There are three flags of zombies. The player can only store 6 Wall-nuts each player, so that means the player can store a total of 12 Wall-nuts. It earns the achievement ZFF's 4 Evr if it is completed the first time.

The player still receives the Wall-nut which is used to bowl, and the Explode-o-nut, but the player does not receive the Giant Wall-nut for unknown reasons. 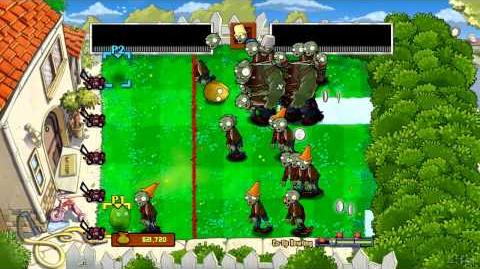 Retrieved from "https://plantsvszombies.fandom.com/wiki/Co-op_Bowling?oldid=2288246"
Community content is available under CC-BY-SA unless otherwise noted.