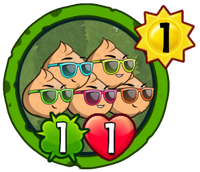 When played: Shuffle two Clique Peas into your deck. For the rest of the game, all Clique Peas get +1

.
On Wednesdays we wear sunglasses.
Clique Peas are an event plant card in Plants vs. Zombies Heroes and members of the

. They do not have any traits, and their ability shuffles two Clique Peas into the plant hero's deck and gives all Clique Peas, including them, +1

and increases their cost by 1

when they are played. The latter part of the ability stacks with each Clique Peas played and persists until the end of the match.

They were added in update 1.16.10, along with Corn Dog, Trapper Zombie, Sap-Fling, King of the Grill, Synchronized Swimmer, and the Galactic Gardens set.

They are based on the chickpea (Cicer arietinum), a legume of the family Fabaceae.

Their name is a portmanteau of "clique," a small close-knit group of people who do not readily allow others to join them, referring to their ability and description, and "chickpea," the real-life plant they are based on.

Their description is a reference to "On Wednesdays we wear pink," a quote in the movie Mean Girls.

On Wednesdays we wear sunglasses.

Try to play this card in a deck with lots of card draw. It is recommended to bring cards that draw other cards such as Flourish so you can get more Clique Peas earlier. This works best with Chompzilla and Grass Knuckles, as they both have Holo-Flora as their superpowers, allowing them to draw cards cheaply and, in turn, getting copies of Clique Peas faster.

Since Clique Peas are both in the bean and pea tribes, they activate the abilities of Admiral Navy Bean and Bean Counter when played, and benefit from cards like Torchwood and The Podfather. However, only Green Shadow can make them work well in a bean deck.

If you are Green Shadow, besides the aforementioned bean synergy, you can use Rescue Radish to Bounce this plant back into your hand to reuse their ability.

Since they boost themselves, both the plant you placed and the others already on the field, they work well with Potted Powerhouse, as she will boost herself enormously for each Clique Peas boosted, allowing another way to deal massive damage to the opponent if the Clique Peas are unable to do so. Clique Peas also work well with Onion Rings, as its ability will boost Clique Peas's stats on top of their boosted stats, making them even bigger threats.

A general Clique Peas user will attempt to mulligan for as many Clique Peas as possible due to their ability.

If your opponent happens to pull this tactic against you, try to keep yourself as ahead as possible.

Crazy heroes can deal with the first Clique Pea by using Bungee Plumber or any other removal so that other Clique Peas don't buff it in following turns. Brainy heroes can use Teleportation Zombie or Teleport to block off the Clique Peas from damaging your hero because Clique Pea users tend to try to finish the game as fast as they can before you accumulate enough brains to deal with them by playing them in empty lanes. Sneaky heroes can Bounce and use

Deadly zombies to deal with Clique Peas, though be wary of Bouncing them as they can gain an extra +1/+1 worth of stats. Hearty can stall turns with Planetary Gladiator and use Escape through Time on him to make their hero immune to damage for the turn as a last-ditch effort. Several

Retrieved from "https://plantsvszombies.fandom.com/wiki/Clique_Peas?oldid=2373599"
Community content is available under CC-BY-SA unless otherwise noted.