Template:Battle for Neighborville Story NPCs Cleatus is an All-Star Zombie in Plants vs. Zombies: Battle for Neighborville. He is found at Z-Tech Factory in Weirding Woods. He gives the player a quest in which they must fix the Lullaby Tape by rewinding it in a washing machine, so it can be used to repair the Divine Boombox.

His name is a pun on "cleats," a type of athletic shoe used when playing football, and the name "Cleatus." 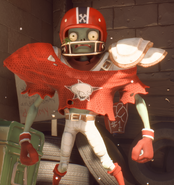 Icon of Cleatus during the quest "Be Kind, Rewind"
Add a photo to this gallery

Retrieved from "https://plantsvszombies.fandom.com/wiki/Cleatus?oldid=2210509"
Community content is available under CC-BY-SA unless otherwise noted.