N/A
Slinging orange wedges with a 3-round burst, this prickly fellow vanquishes her foes with precision shooting and Vitamin C.
Citrus Cactus is a variant of the Cactus in Plants vs. Zombies: Garden Warfare. She was added along with the Tactical Taco Party DLC Pack and is unlocked upon opening the free Citrus Cactus Character Pack.

Slinging orange wedges with a 3-round burst, this prickly fellow vanquishes her foes with precision shooting and Vitamin C.

Orange Burst is Citrus Cactus' primary weapon; all facts below apply to a fully upgraded weapon.

Consider Citrus Cactus to be a Sun Pharaoh with a much longer range. Her weapon fires three consecutive shots in a burst, which can deal much damage if all shots are critical hits. Utilize her damage, combined with the abilities of the Cactus class, and you have a ranged powerhouse who can lock down points on the map as she pleases, along with the firepower to stay there. 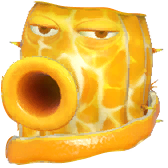 A promotional picture with Citrus Cactus

Another promotional picture with Citrus Cactus 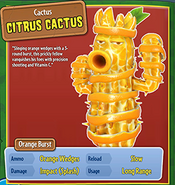 Citrus Cactus in the Stickerbook

Citrus Cactus in the character-selection screen 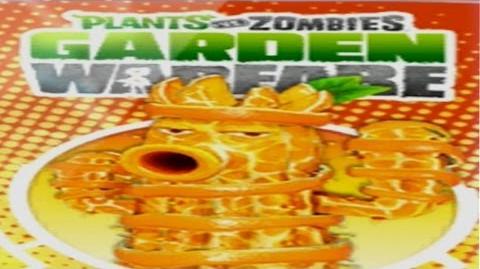