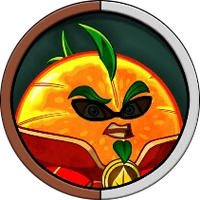 For other versions, see Citron (disambiguation).

Citron is a plant hero in Plants vs. Zombies Heroes, and a leader of the

Smarty classes, alongside Beta-Carrotina. His signature superpower is Peel Shield, which shields all plants for the turn it is played, and gives Citron a card.

He is based on the plant class in Plants vs. Zombies: Garden Warfare 2 with the same name and appearance.

Wanted to be a poet, but couldn't find anything that rhymed with orange.

Citron combines the two Amphibious Plant classes: Guardian and Smarty. His water wing wins the game in the water lanes while his defensive Guardian Plants hold the ground.

Citron is perhaps a very difficult hero to play as for most players, but becomes quite formidable as you learn how to play as him. Due to his access to both Guardian and Smarty plants, Citron proves most powerful in his ability to stall for time and avoid taking damage. His defensive Team-Up plants, such as nuts, can tank a good amount of damage. His

Freezing and Bouncing cards can temporarily disable priority zombie targets so that they can be properly dealt with later on. He also has the ability to cover all lanes with access to a large number of Amphibious plants, some of which also have the Team-Up trait and can help defend more valuable Amphibious fighters. His superpowers also allow him to stall for time - Transmogrify is great for dealing with troublesome zombies, while Nut Signal, Root Wall, and Peel Shield are extremely effective at blocking zombie attacks.

With all these tools at his disposal, Citron should be able to stall until he can bring out the big guns, and protect them as well. The Great Zucchini functions impressively well with Splash Damage plants to clear the field. Those valuable plants should be protected with defensive Team-Up plants, or possibly Peel Shield if none are present.

Another unique strength that Citron has is that he can deal with Gravestone zombies more efficiently than any other hero. Besides Grave Buster, which he can use to destroy gravestones, Citron also has access to a variety of Smarty cards that can nullify Gravestone zombies to a lesser extent, namely Spyris and Cool Bean. Especially with Cool Bean, he can play Winter Squash first and then Cool Bean to destroy all gravestones on the field. This will prove very useful when against zombie heroes who utilize Gravestone zombies, especially Sneaky heroes.

Like Wall-Knight, however, Citron's main weakness is that he has no way to consistently boost his plants' strength, meaning that Hearty heroes can ruin his defenses very easily by using Rolling Stone and Weed Spray. His superpowers do not make up for it either, as they are all defensive. What makes things worse is that he lacks instant damaging cards, and his only instant-kill options for zombies with 3 strength or below are Shrinking Violet, Winter Squash, and Witch Hazel, but they can only do so much against swarm decks unless they are also swarmed (which isn't likely to happen as they are expensive), meaning that his opponent can spam weaker zombies to overwhelm him. Citron's only other option to fight weak zombies is to wall them with his high-health plants, or use freezing cards to destroy them more easily.

Citron is a force to be reckoned with. He has access to more Amphibious plants than any other plant hero, requiring the player to pay attention to the aquatic lane(s) on the field. His signature power, Peel Shield, can be equal to, or even more obnoxious than Wall-Knight's Uncrackable, so you should bring instant-kill tricks in case your fighters cannot take out Citron's plants on their own. You should also be careful about your gravestones, since he can control them due to his access to Grave Buster, Spyris, and Cool Bean (especially with Winter Squash).

This deck allows easy coverage of the field, with Navy Bean boosting virtually all of Citron's plants. However, since most Amphibious plants do not have good stats, use tricks like The Chickening to wipe all plants with low health before Navy Bean can boost them, and Rocket Science to remove any high-strength plants like The Great Zucchini. The best hero to counter this deck would be Professor Brainstorm, since he can play both of the forementioned tricks. However, beware of Brainana, as it can prevent the use of tricks.

This deck focuses on Splash Damage and the reactivation of abilities. However, once again, they do not have good stats, so using Professor Brainstorm is the way to go. This time though, beware of Rescue Radish, as it will allow plants with dangerous abilities to be played again. Brainana is also an issue here as well, so you may want to have a way to deal with it.

This deck is about blocking off zombies from being able to hurt Citron or his plants easily. However, only Sportacus and Snapdragon are immune to Rocket Science, Rolling Stone, and Weed Spray; everything else gets destroyed to one of the aforementioned tricks. Hence, use Rustbolt as he has easy access to all these tricks. However, make sure Citron is defeated before the 9th turn, or he will unleash Wall-Nut Bowling on you. You should also beware of Sportacus' ability if you are to play tricks.

A Vast Expanse of Nuttin'

With this deck, Citron will stall you using his high-health plants until he can bring out Pecanolith. However, despite his plants being able to do massive damage with their health, they are all still weak to Rolling Stone, Weed Spray, and Celestial Custodian due to their lack of base strength. Therefore, using any Hearty hero will do good here. Since the only way for him to draw cards is via Planet of the Grapes, you can force him into a topdeck situation by replacing his environments with your own cheap environments. Just be careful if there are both Galacta-Cactus and Mirror-Nut on the field at once, as if you are not aware of Galacta-Cactus's ability, it will damage all of Citron's plants, activating Mirror-Nut's ability multiple times.

This deck is a Team-Up deck featuring Go-Nuts and many other Team-Up plants. However, it also utilizes Three-Nut and Loco Coco to give most, if not all his plants a good head start. Citron also bring in Poppin' Poppies, who will heal him in a pinch with her Lil' Buddies. If unprepared, Citron's Go-Nuts will boost many of his plants, wrecking your defenses easily. Since his plants will start from 3 strength, Rocket Science, Rolling Stone, and Weed Spray are not recommended. Instead, a sports deck with Knockout and more importantly, Chum Champion is optimal, since Knockout can only destroy so many plants. Targeting any Witch Hazels is also important, as they can pick off your key zombies easily. Since they will most likely behind a Team-Up wall, playing tricks is recommended.

Retrieved from "https://plantsvszombies.fandom.com/wiki/Citron_(PvZH)?oldid=2204995"
Community content is available under CC-BY-SA unless otherwise noted.