For other uses, see Citron (disambiguation).

To other plants, Citrons—snazzy bounty hunters who previously resided in the future—embody concentrated style devoid of artificial flavor.

Citron is a playable plant class in Plants vs. Zombies: Battle for Neighborville. He is a

Defend class who specializes in providing mobile defense though his ally protecting Peel Shield or his enemy stunning E.M.Peach.

Citrons are the mobile team defender. The Peel Shield provides cover for allies. Best to hold strategic locations or help the team break through tough chokepoints.

Citron's primary weapon is the Juice Cannon, which fires 3 projectiles at once. It deals 3 damage per projectile (4 critical) and fires at a medium rate of fire with a high amount of bloom. Additionally, the cannon's muzzle flash also deals 3 damage provided enemies are close enough.

The Peel Shield makes a return as Citron's secondary weapon. Instead of zooming in, Citron instead puts up his Peel Shield in front of him. The shield boasts 600 health, and it regenerates its health when not in use. Citron moves slower while the shield is out. Additionally, Citron also gains ammo when blocking damage.

With the readjustments to older characters in Battle For Neigborville, Citron has lost some of his offensive damage but has been replaced with a more defensive setup than the previous game. His new shield being able to be thrown up at anytime gives him more of a tank role, protecting you and your allies. However, his shield can be broken, leaving you defenseless, so keep an eye on it’s health at all times.

His weapon is best used at close ranges, due to the high bloom it has. Where Citron really shines is defending or pushing an objective. Using his shield, you can push through a point with your allies providing defense, Spin Dash can knock enemies out the way if they're all close together. Navel Laser is best used for aiming at a single target, rather than using it for crowd control.

Due to how much health Citron has, and how hard it is to land a hit on him, you'll have to be cautious to fight. Try to catch him off guard if you can. It isn't that hard, due to how big he is. You can also get him from a distance since he's suited for close quarters. Once he puts his shield up, you'll want to move around, looking for an opening.

Watch out for Spin Dash though, as it can take out a chunk of your health if you get hit. For Navel Laser and E.M. Peach, try to avoid it, since E.M. Peach will give Citron enough time to react, and Navel Laser because the damage of it increases over time.

Try to abuse Citron's enhanced mobility while in Ball Form. He can jump higher while sprinting, allowing him to reach vantage points that would normally be inaccessible to other characters.

Citron can cast E.M. Peach while sprinting. Simply activate the ability while walking normally, then quickly start sprinting before it fires. You can use this to shoot the E.M. Peach over obstacles that are normally to high to aim an E.M. Peach over.

Taunting while sprinting as Citron causes him to momentarily vanish for the duration of the taunt. Citron is the only character in the entire game who experiences this bug. Citron's can do this in all modes (pve + pvp). It doesn't matter if you have good or bad internet, this bug works 100% of the time. Enemies can still hear Citron and see his health bar.

Citron also maintains its usual large hitbox while invisible and can be vanquished normally (Citron is still completely visible to enemy players. He only disappears on the player's screen). This bug is still in the game as of 2019's Feastivus event. 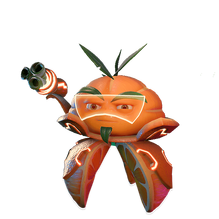 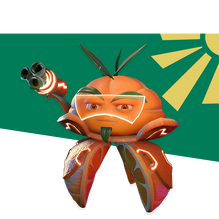 The Rare Citron 5000, exclusive for Luck O' the Zombie
Add a photo to this gallery

Retrieved from "https://plantsvszombies.fandom.com/wiki/Citron_(PvZ:_BfN)?oldid=2299590"
Community content is available under CC-BY-SA unless otherwise noted.