When played: All plants get -1

.
Sports Evolution: Destroy all plants with 2

or less.
The Retiarius gladiator was classically armed with a trident, a net, and a 10-day-old fish.
Chum Champion is a triassic legendary zombie card in Plants vs. Zombies Heroes and a member of the

. It does not have any traits, and its ability gives all plants on the field -1

when it is played, while its Sports Evolution ability destroys all plants on the field with 2

or less. The Evolution ability activates after its normal ability does.

It is based on a gladiator, or more specifically, the retiarius, a Roman gladiator who fought with equipment styled that of a fisherman.

Its name is a combination of "chum," referring to the fish stuck on its trident and its Sports Evolution animation where it flings pieces of fish at the plants, and "champion," referring to its sports tribe and also possibly, its legendary rarity.

For a 5-brain zombie, Chum Champion has both less than average strength and health. This means that while it can destroy a few weak plants, it is not suitable for combat. Its regular ability is also a bit underwhelming, giving plants a measly -1

. Chum Champion's true value, however, shines when you are confronting a bunch of 3

plants, as you can lower their strength to 2

, which is just the amount of strength needed to be destroyed by its Evolution ability. Examples of them include Three-Nut, Loco Coco, and Pineclone. It also shines against many nuts (including the two mentioned before), as they usually don't get their strength over 3. You can also use cards that lower strength like Landscaper and Black Hole beforehand to have it destroy more plants.

As Rustbolt, Chum Champion can be played during the tricks phase, using Teleport or Teleportation Zombie. This way, Chum Champion is protected from being destroyed by tricks like Shamrocket and actively counters 3

or lower plants that turn, provided a Sports Zombie is on the field to activate his Evolution ability.

However, the main problem with Chum Champion is that it has extremely low stats for a 5-brain zombie and that you have to sacrifice a zombie for it to even make much of a difference. It doesn't do well with maintaining control since you are investing on a zombie with very low stats, and it doesn't do well with sports synergy either. While its ability can potentially clear the field of many plants, it is still possible for your opponent to rebuild their defenses right after you play it and punish you for the weak play.

Chum Champion is not much of a threat in terms of stats, and can be destroyed by any strong plant or trick like Shamrocket. Its ability, however, can be devastating if you are running a deck focusing on playing many plants with 3

or less. If your opponent is running a sports deck, make sure no sports zombies are on the field as they can use them for Chum Champion's Evolution and ruin your strategies.

Be careful when going up against Rustbolt, he may attempt to use Teleport or Teleportation Zombie to potentially clear your field on Turn 5 by playing Chum Champion during the Tricks Phase. To prevent this, try removing any Sport Zombies off the field to stop his Evolution from occurring. 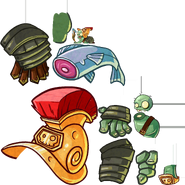 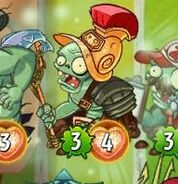 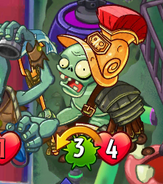 Unevolved Chum Champion with the