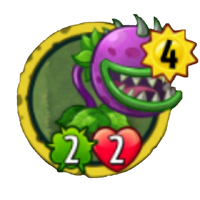 Chomper is a premium super-rare plant card in Plants vs. Zombies Heroes and a member of the

Chomper on the advertisement for the Chompzilla Ally Pack
Add a photo to this gallery
Retrieved from "https://plantsvszombies.fandom.com/wiki/Chomper_(PvZH)?oldid=2282825"
Community content is available under CC-BY-SA unless otherwise noted.