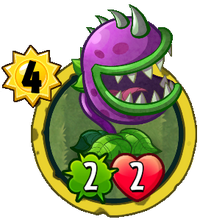 Seemingly a value pack containing Whack-a-Zombie and a 2/2 plant at 4 sun, it is a pretty underwhelming card with no real uses in competitive scenarios. Chomper's stats are very weak, and when compared to other plants of the same cost, such as Elderberry, Bananasaurus Rex, and Red Stinger, Chomper is disappointing in most ways, as it fails to end the game, do damage, gain tempo, and it isn't even great as a control card, since it is very limited in that aspect. The only advantage over tricks is that it can target untrickable zombies and leaves a body on board, but even then, it must be played on that lane, and having a weak plant simply complicates your troubles.

In case you decide to use Chomper in your deck, then you can make it a bit better with the usage of strength decreasing cards like Weed Whack, Shrinking Violet, or Water Balloons. However, this isn't a good strategy since it takes up too many cards, and some of the combos are restricted to certain heroes because the cards are either superpowers or in other classes. If it ends up clogging the lane, you can play an Evolution fighter on it, or bounce it as Rose, although the effectiveness of these strategies are similarly questionable.

Due to Chomper's rare appearances in decks, you shouldn't play around it, but even if you do so, there is not a lot of things it can counter. In most cases, your 4

zombies have more than 3

, so Chomper ends up being quite useless due to its poor base stats. To defeat Chomper itself, most removal cards can take it out without further issue, but it can be more useful to keep it on the field as a Super-Block Meter charger and to clog the opponent's lanes.

It is not recommended to bounce Chomper, as your opponent may replay it to destroy another zombie.