For other uses, see Chomper (disambiguation).

Chompers are best thought of as the plant equivalent of a family dog—rambunctious, loving, and dedicated to eating everything.

Chomper is a playable plant class in Plants vs. Zombies: Battle for Neighborville. Chomper is an

Attack class that specializes in close range attacks. Unlike in the Garden Warfare series, Chomper can no longer instantly eat zombies unless while using Burrow.

Close range attacker that can snare and slow opponents and can Burrow underground to instantly vanquish opponents. Don't let them see you coming!

Chomper's primary weapon is the Chomp, a melee weapon that deals 41 damage in a very short range.

Chomper's secondary weapon is the Slobber Shot, a ranged attack that can only be used when aiming. It deals 34 damage (41 critical) damage and has a slow rate of fire. 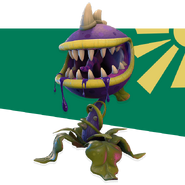 Chomper with the "Unicorn Stuffy" hat in an advertisement in Plants vs. Zombies 2

Chomper's "Abominable Chomper" Costume in a Feastivus advertisement in Plants vs. Zombies 2

The Super Rare Abominable Chomper costume, only available during Feastivus

The Common "Shaggy Shampooie" costume, exclusive for Valenbrainz
Add a photo to this gallery

Retrieved from "https://plantsvszombies.fandom.com/wiki/Chomper_(PvZ:_BfN)?oldid=2302135"
Community content is available under CC-BY-SA unless otherwise noted.